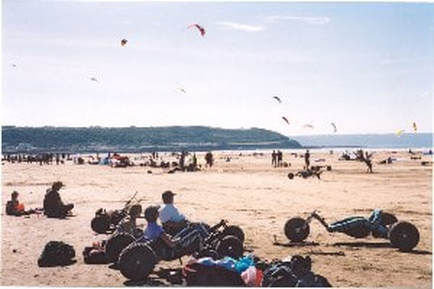 We visited Westward Ho!, Devon, because there was a power kite festival down on the beach. So whilst Paul was suitably distracted with a kite in hand, Christopher and I paddled, built sandcastles, looked at the kites, and ambled around the beach area without the kites and investigated rock pools. It is a beautiful area facing north and west. We stayed in a lovely B+B called Culloden House, built and owned originally by the golf course founder. The golf course has the oldest links in England.
At the town end of the beach there are large boulders covered in gastropods, specifically Littorina saxatilis, Monodonta lineata, Gibbula umbilicalis and Patella vulgata, but strangely no mussels. Then the beach itself is strewn with bivalves, in particular Ensis siliqua, little Nucula turgida and Mactra corallina. Also at this end of the beach for the rest of family – mini golf, icecream and gift shops, and toilets. To park by the beach costs £3 per day. At the far end is a visitor centre, gift shop (no icecreams!) and toilets. Watch out for flying golf balls and stray sheep as it is nature reserve which backs onto a golf course. 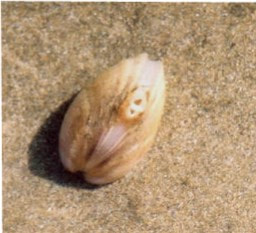 So at this end of the beach, at the edge of the golf course, on the corner, there is an area of small boulders and large stones. The tide captures the water, so rock pools have formed. Christopher and I were delighted to find a rather large crab in one pool. But we also found a hermit crab in Littorina littorea, and a living Mactra corallina (which I never seen before). So we paddled about, collecting more Ensis siliqua and dead Mactra corallina. Then I found a first for me, the beautiful Pharus legumen with its delicate yellow and pink. I had seen it in books before, but never found one on a beach. Not only that, both valves were intact, and there were hundreds.
Another day we visited Saunton Sands and the edge of Croyde Point. This is north of the bay from Westward Ho!, and took approximately an hour to get there. We stopped in Croyde itself because there is a rock, gem and shell museum. Entrance is 30p. It is on the main coastal road. It has the most amazing displays of rocks, minerals and gems. So many I can't remember it all. However there was a display on how diamonds are cut, amethysts, and other gems uncut in their natural form, slices of rocks, and my husband the geologist said it is worth a visit. The shells are beautiful, large specimens, mostly identified with location details. There are different groupings; by family, by location, by size. Worth a stop and a browse.
Saunton Sands itself had few shells on it the day I was there. However I was fascinated to find along the upmost tide-line remains of very large red spiny crabs, little spotty crabs, perfect sea potatoes and Mactra corallina (both valves). They were grouped together every few steps, and had obviously been taken from one habitat by a storm and beached at the same time. The crabs and shells were already picked clean, the crabs minus their legs. It was most peculiar, no other species. It was as if they had had a party together and were stranded with no way home.
Littered across the beach much closer to the water were Nucula turgida, Mytilus edulis and Ensis siliqua. The latter I was no longer picking up, as I already had enough from Westward Ho!
On the most northern side of the beach, the rocks form part of Croyde Point. Christopher and I paddled around the rocks finding sea anemones (three varieties), more crabs and live gastropods crawling around. We observed live Gibbula umbilicalis just under the water, with dead Mytilus edulis in a row. We found Nucella lapillus and some were banded like the Cornish examples (see Pallidula, October 2003). Interestingly there were some rocks with Patella vulgata but no Mytilus edulis, and vice versa, but never together; I guess they don't like sharing the same habitat.
I enjoyed and would recommend my weekend in Devon. The shells were very different from Norfolk, my normal shelling ground.