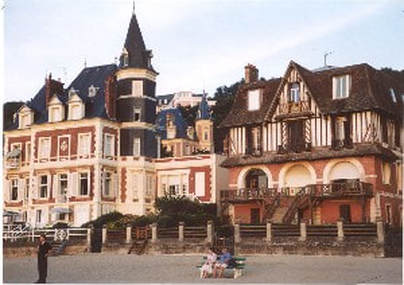 After spending two very hot weeks (42° C) in the Loire, I was very happy to be reunited with my husband Paul, to spend a family holiday at Trouville, on the Normandy coast. The little town is west of Honfleur, east of Caen. West of Trouville divided by the river is the town of Deauville, famous for horse racing throughout August, and an international film festival in early September. We explored Trouville only. The temperature was 32–35° C, the sea 22° C – lovely. Trouville is an excellent destination for all ages. For little ones the streets are small, pedestrian-only, full of patisseries, boulangeries, tabacs (full of sweets) and for us older ones, antiques, bric-a-brac shops, second-hand books, restaurants, crêperies, icecream stalls, fruit de mer, Normandy cider and french wine!

Running the full length of the beach are les planches, the wooden boardwalk, off which, for your non-shell enthusiastic family, there are tennis courts, outdoor pool, aquarium, bouncy castles, toilets and a play park for the under 5s. Christopher tried out and enjoyed all the amenities exceedingly.

The fishermen go out on one tide, and return on the next. The fish market is therefore fresh every day, and their produce is available at all the restaurants with the advantage that it's all cooked. You can eat!
Alas the scallops were not available in August.

Now that I have whetted your appetite. The beach is in strips. A wide strip of fine sand, then towards the water, gritty sand, sand, then mud, then sand. The high tide does not cover the entire beach, so there is always ample room for the family, tourists, sandcastles and shell collectors. On the east side of the last board the high tide leaves a bank of shells with hidden delights. The main bulk of the shells are Mactra corallina (in varying quality), Cerastoderma edule (vast numbers), Acanthocardia tuberculatum (again huge numbers), Acanthocardia aculeata, Donax vittatus (nearly as many as the Cerastoderma edule), Nassarius reticulatus, Macoma balthica, Spisula subtruncata.

Some delights are in good condition even on the beach. I found Lunatia alderi (huge numbers), Lunatia catena, Nucella lapillus with beautiful colour variation, and large sized Macoma balthica. I got very excited when I found many Epitonium clathrus in various states of quality. I am just fascinated by the delicate whorls and variation in colour. I also found for the very first time three Acteon tornatilis and I was astounded by the pretty pink colour with the black banding – to say I was entranced and thrilled is an understatement. Do you remember the thrill the first time you found something?
I was also challenged into finding small shells, such as Nassarius incrassatus, Nassarius pygmaeus. I was also amazed by some small land and freshwater shells, which had come down the river and been swept onto the beach by the tide. These were Theodoxus fluviatilis, Discus rotundatus, Lymnaea auricularia, Trichia hispida, Theba pisana. My thanks to Derek Howlett for their correct identification, as I currently have no freshwater or landsnail shell books.
When the tide comes in, it leaves a new deposit, washes the old, and mixes them all up. The water is shallow, 4 ft deep for a long distance, half a mile, and once the tide goes out, the tourists all move with the water's edge. Left in the wake are Lutraria lutraria, Donax vittatus, Donax variegatus. I was excited to find the Lutraria lutraria, as I have only seen one good specimen before, thanks to Derek's stall at the Show, and so was pleased to find it and identify it myself. The donax are numerous, but I have to say I just couldn't resist collecting yet another and another due to the differences in shape and colour variations on either side of the shell.
The challenges of Trouville are two-fold. One – to try to get your car parked, as most hotels do not have garages or spaces, leaving you to park somewhere on the road with everyone else: weekends are exciting. Two – find both sides of a bivalve. So after eight excursions, with specimens in nappy bags (fragrant to keep out the odour in the hotel), boxed in icecream containers for easy transport, we left Trouville.
Brettville, 10 minutes from Cherbourg harbour, had a poor showing, but for the record I found Aequipecten opercularis, Monodonta lineata, Gibbula umbilicalis, Gibbula cineraria. I did find the remains of some broken shell with a lovely mother of pearl. At home with the books, I discovered it was another first for me – a Pandora inaequivalis (albida) – not broken, it is just a strange shape. So the dull beach did give up a beauty on its shores after all.