"I have been collecting stamps with shells and other molluscs for many years, and often the stamp is just as beautiful as the shell shown on it. This is a selection to show some of the stamps with a story." 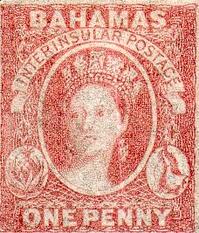 This 1859 stamp was the first stamp ever issued to show a shell. Strombus gigas is the national emblem of the Bahama Islands, and is shown here in stylised form on the right margin of the stamp. 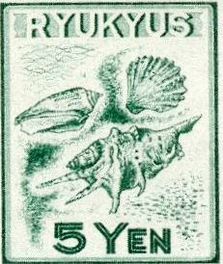 This is the first stamp, issued in 1950, to show "realistic" shells: Strombus luhuanus, Decatopecten radula and Lambis lambis, and therefore is important in the hobby of shell stamp collecting. 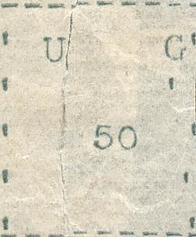 Cowry shells were used as currency in much of the world, only dying out in parts of Africa in the mid-20th century for some forms of trade. The first stamps of Uganda were issued before coinage reached this country, and the value on this stamp is "50 cowry shells", being issued in 1895. 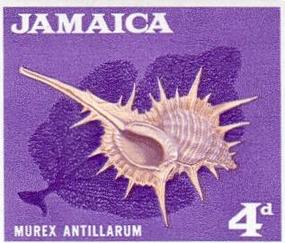 I started collecting shells during a posting to Jamaica, and this led directly to my interest in stamps. This stamp showing Siratus formosus (called Murex antillarum on the stamp) was issued in 1964. 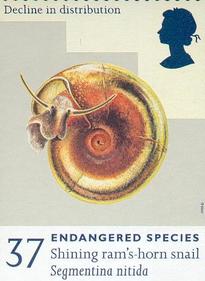 This is the only stamp ever issued by Great Britain (in 1998) to show a realistic shell (Segmentina nitida), and therefore had to included among my personal favourites. 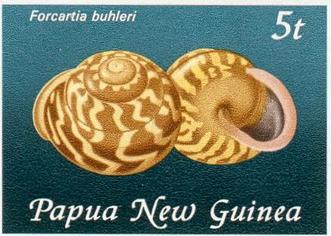 This must count as a favourite, as the shell (Forcartia buehleri – incorrectly spelt on the stamp) exhibited with this 1981 stamp won the Walter Karo Trophy at the Shell Show in 2002. 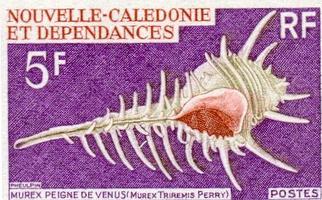 The early stamps of New Caledonia were most beautifully engraved, and a real work of art; this stamp showing Murex ternispina (syn. Murex triremis) was issued in 1969.

It is important to remember that molluscs include animals without shells. This 2003 stamp showing Chromodoris quadricolor is a reminder that nudibranchs are molluscs. 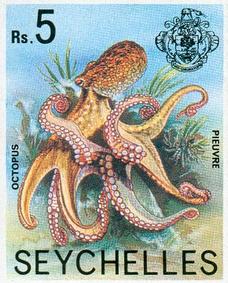 Octopi are also molluscs, and are frequently shown on stamps. This stamp issued in 1978 shows an octopus, but so far I have not been able to give it a specific name. 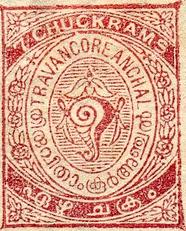 The sacred Indian Chank, Turbinella pyrum, is shown in stylised form on numerous stamps from the states of Cochin and Travancore in India; they make a fascinating collecting interest due to the variety and complexity of stamp issues.
For more detail on these stamps and others, see Tom Walker's article here.