The priest, the politician and the ballerina: the stories behind shell names

by Kevin Brown
Photographs courtesy of Gavin Malcolm and Des Beechey
There are many interesting facets to a study of shells, and one which has long interested me is the stories behind some shell names. Some people might say that the name does not matter, providing that you can identify the shell and put a name to it, but how much of the allure of Conus gloriamaris comes from it's name, "Glory of the Seas"? And how much more interesting if some of your shells have stories attached to their names. One advantage of this sort of study is that you don't even have to have the shells concerned. This then is the story behind a few of the more interesting shell names.
Many shells are named in honour of shell collectors. I sometimes think that there is a cumingii in every genus, although given Hugh Cuming's eminence as a collector this is perhaps not surprising – see S.P. Dance's Illustrated History of Shell Collecting for a detailed account of Cuming's career. More recently Phenacovolva dancei Cate, 1973 and Chicoreus paini Houart, 1984 recognise the contributions to conchology of Club members Peter Dance and Tom Pain respectively. There are, of course, hundreds of examples of shells named for collectors, perhaps the most prominent of these being that of Rotaovula hirohitoi Cate & Azuma, 1973 named in honour of the late Emperor Hirohito of Japan, a dedicated shell collector.
Imagination and humour play a part in the naming of shells. I have heard of a conchologist describing the genus Ba simply so he could use the specific name humbugi – Ba humbug! Although I have never seen a reference to this shell, the genus is certainly listed in Vaught's Classification of the Living Mollusca so perhaps the story is true. 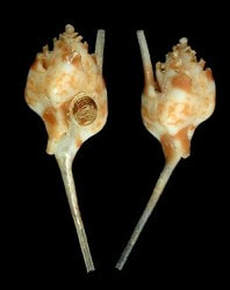 For imagination one can do no better than look at Trubatsa pavlova (Iredale, 1936) named in honour of the ballerina Pavlova. One look at the shell shows how appropriate this name is. Other artists honoured in shell names are the French painter Paul Gauguin – Conus gauguini Richard & Salvat, 1973; and the composer Rossini – Cymbiola rossiniana (Bernardi, 1859) is dedicated "to the illustrious composer Rossini, as a tribute of our admiration". Authors, on the other hand, do not seem to get a look-in, although Ian Fleming, creator of James Bond, who was himself a shell collector and incidentally has a shell-collecting incident in Dr. No, would seem to be a prime candidate.
Trubatsa pavlova (Iredale, 1936)
Priests and politicians are not to be forgotten in the name game. The Easter Island endemic Cypraea englerti Summers & Burgess, 1965 honours the late Father Sebastian Englert who spent much of his life on Easter Island and of whom Burgess writes, "This kindly and beloved Priest was a keen observer and a tireless worker in his search for knowledge of the local marine and terrestrial fauna and ancient history of this remote dot in the Pacific." It is fitting that his name will not be forgotten whilst there are shell collectors.
The Hawaiian endemic land snail Partulina dolei (Baldwin, 1895) was named after S.B. Dole, President of the Republic of Hawaii. The Republic of Hawaii was proclaimed in 1894 and in 1896 Hawaii was annexed to the United States so this shell marks a short and important time in Hawaii's history.
Explorers are naturally remembered by the names of shells first recorded on their voyages, or from areas which they explored. Matthew Flinders, for instance, has a number of Australian species named after him, Altivasum flindersi (Verco, 1914) being an example. Other shells like the living fossil Neopilina galatheae Lemche, 1957 record the names of the research ships themselves. Thus the voyage of the Galathea will always be remembered.
Sports are not to be forgotten: the conchologist A.H. Verrill writing about the discovery of several new species states that "Among these was the lovely rose-pink Murex consuela named after my famous bull-fighting granddaughter." Now know as Siratus consuela (Verrill, 1950) this is still a beautiful and choice shell, but few people will be aware of the story behind the name. 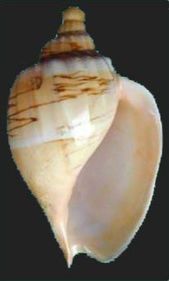 Perhaps one of the most unusual stories behind a shell named after a person is that of the volute Livonia roadnightae (McCoy, 1881). Macpherson refers to this "Being first noticed by that eminent botanist Baron von Mueller when on a visit to the Gippsland Lakes District where the specimen was serving as a prop to keep open the bedroom window at his hotel. It was found on the ninety mile beach by Mrs. Roadnight, his landlord's mother, after whom it was named." It is interesting to speculate what name the shell would have had had the Baron been given a different hotel room! Of such is history made.
Livonia roadnightae (McCoy, 1881)
The commonest origin of shell names apart from people is from place names and this is particularly appropriate where the shell comes from a restricted locality – the murex Poirieria zelandicus (Quoy & Gaimard, 1833) from New Zealand, or the freshwater bivalve Pseudospatha tanganyicensis (Smith, 1880), endemic to Lake Tanganyika, being good examples. Other geographical names may not be so obvious. Cymatium parthenopeum (Von Salis, 1793) was originally described from Naples; "Parthenope" was an old name for Naples and thus the specific name is derived from the type locality. On rare occasions a shell is even named after a building, the Cuban land snail Liguus fasciatus form austinianus Guitart, 1945 being named for Austin College in Texas and Phenacovolva honkakujiana (Kuroda, 1928) named for the Buddhist temple "Honkaku-Ji" at Kii in Japan, which owns the type specimens.
As well as geographical locations, shell names can sometimes indicate the precise habitat of the species concerned. For example, deep-sea limpets of the genus Osteopelta live not on rocks but on the bones of dead whales (osteo- in compound words coming from the Latin os meaning bone, so of or pertaining to bones). Whilst the Western American eulimid Turveria encopendema are parasitic on the sand dollars of the genus Encope. So knowing the origin of the shell's name can even help to tell you where to look for the shell.
Occasionally the native use of the shell is recorded in its name, Cypraea moneta Linné, 1758 – the Money cowrie – being the obvious example, but Linnaeus obviously also knew that the American Indians used the shell of Mercenaria mercenaria (Linné, 1758) to produce the wampum beads which they used as a form of currency.
One species, Conus tribblei Walls, 1977 was named after a pet cat! So even animals can get in on "the name game". Walls writes of this species, "Named in honour of my favourite cat, Tribble, who in turn was named after the featureless balls of fur made famous in the science fiction play "The Trouble with Tribbles" by David Gerrold, from the TV show Star Trek." Perhaps this even adds an extraterrestrial dimension.
Perhaps the most bizarre story behind a name is that of the New Zealand bivalve Ascitellina urinatoria (Suter, 1913). Powell (New Zealand Mollusca) referring to this name writes that "the late Mr. Henry Suter, with his cryptic sense of humour, was merely striving to point out that the original specimen owed its discovery to the fact that it was washed out of the dredged mud, lodged in the scuppers of the research vessel, by a method suggested by the choice of name".
Almost every shell has its own story which can add a new dimension to the study of shells and which somehow makes the shells stand out as individuals. We all too often use these names without thinking of what lies behind them.
This article by Kevin Brown was originally published in October 1994 in our magazine Pallidula.
We would like to thank Des Beechey and Gavin Malcolm for the use of their photographs of Trubatsa pavlova and Cypraea englerti respectively.