"I have been collecting shells since I could walk and collect British shells and the genera Tellina, Fusinus and Patella. I love beach-combing anywhere in the UK and am still learning about the diversity of shells our island has to offer. If on holiday abroad, we usually pass a beach, and I try to find something. It is amazing how successful one can be when not trying (Spain, Canaries), and unsuccessful when trying … (Kenya, New Zealand, Australia). I grew up by Helen's Bay beach in Northern Ireland, and for as long as I can remember have combed the beach, poked about in rock pools, looking at shells, fingering them, collecting them in my pockets for further enjoyment at home. I found it challenging to pick just a few, but here they are with some interesting stories." 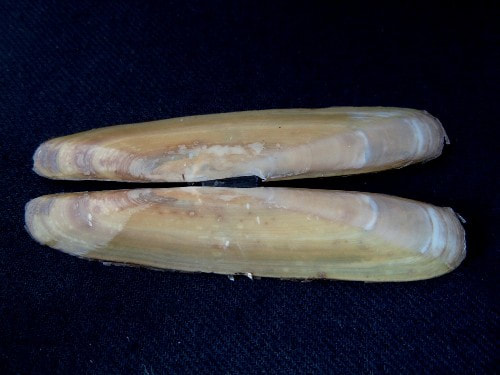 Pharus legumen Linnaeus, 1758  self-collected at Westward Ho!, Devon, UK, September 2003. I was there as a kite widow, the bonus being I was on a beach, with the potential for great shelling. For the preceding two days there had been south-westerly winds, hopefully leaving shells on the beach. I found many giant Ensis siliqua Linnaeus, 1758, leading to rock pools formed of boulder stones and full of hundreds of Pharus legumen. I was entranced with the delicate colour of pink and yellow, with the fragility of the shell itself. So many were undamaged, and it was the first time I had found the shell outside of a book. 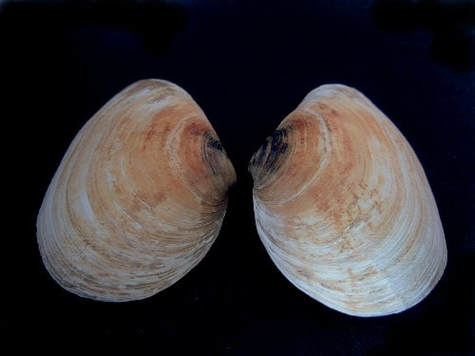 Mya arenaria Linnaeus, 1758  self-collected at Wells Beach, Norfolk, UK, April 2003. I first found this species here five years ago, but this year was the first time I found a mature specimen with both valves. They remind me of ears. I am fascinated with its hugeness, toughness, yet due to colour variations of orange, yellow and white, I do not consider it ugly or boring. I found an entire colony dead from an oil spill, and the colony had only just been revealed from under the shifting sands of Wells. 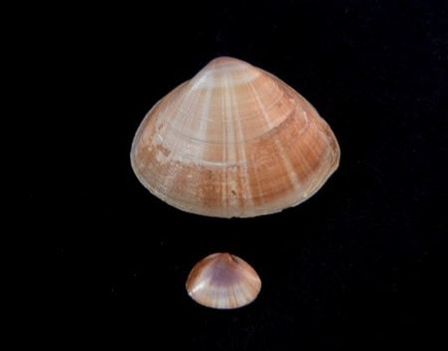 Mactra corallina Linnaeus, 1758  self-collected at Saunton Sands, Devon, UK, September 2003. I had often found these shells in Norfolk, but never both valves. To my delight along the tideline of Saunton Sands I found hundreds of Mactra corallina, with sea potatoes and big spiny crab remains. I love the colours of the juvenile, and find it amazing that the rays are different on every specimen. 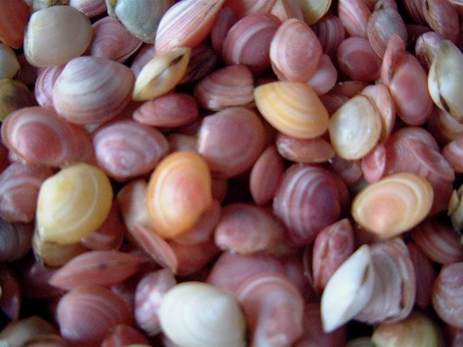 Macoma balthica Linnaeus, 1758 self-collected at Rampside, Morecambe Bay, Cumbria, UK, October 2003. A beach was covered in Cerastoderma edule, L. 1758, and lots of the genus Littorina, but most amazingly all of these Macoma balthica. It is also known as the Baltic tellin, so as I collect tellins I am also interested in this shell. I had never found the bivalve with both valves easily. I was amazed at the colour variation and love all the colours of dark pink, pink, pale pink, yellow, cream, white, peach – couldn't chose one, so here is a group. 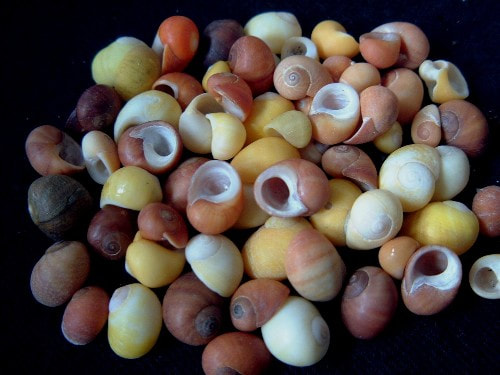 Littorina obtusata Linnaeus, 1758  Hicklin family collected at Polridmouth, Cornwall, UK, March 2003. I love Littorina obtusata, but they are few and far between on Wells in Norfolk. I love the colour variation, but also the banding and little checks apparent on some of the brown specimens. I love the feel of them, the solidness, the smoothness of the flat whorls. 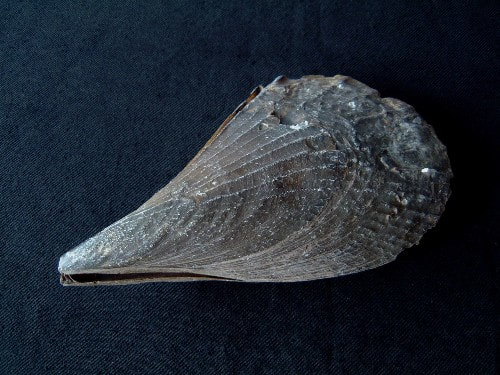 Pinna rigida Lightfoot, 1786  self-collected at Honeymoon Island, Florida, January 1998. Scattered across the rocks, abandoned like rubbish were hundreds of these amazing fragile shells. I could only conclude that a storm had abandoned them with the Angel wing. It was the only time I found these species in Florida. 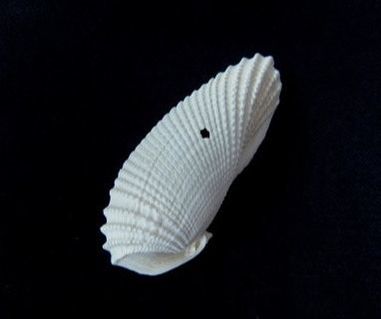 Cyrtopleura costata Linnaeus, 1758  self-collected at Honeymoon Island, Florida, January 1998. The island does not live up to its name – we were hounded and got very badly bitten by vicious mosquitoes. We sought sanctuary on the rocks, with no vegetation (so no mosquitoes) and there found my first Angel wing – a perfect except for one hole left by a hungry bird. 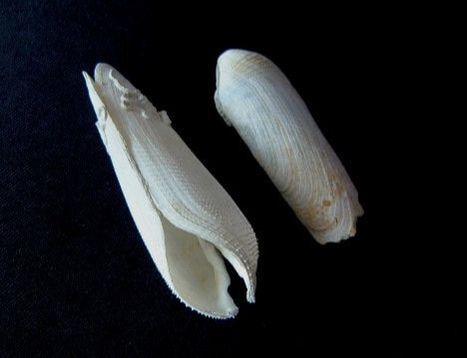 Pholas dactylus Linnaeus, 1758  self-collected at Titchwell Beach, Norfolk, December 2002. Other specimen collected by Koen Fraussen, France. Titchwell is big RSPB reserve which goes down to a beach which supports many boring shells, that is, they bore into the rock, clay/mud present on the beach. This is the only example of Pholas dactylus I have found, but I was please to find so much of it intact, and the challenge is now to find a complete bivalve like a purchased specimen. 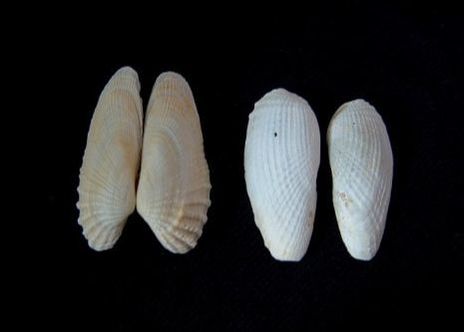 Petricola pholadiformis Lamarck, 1818 and Barnea candia Linnaeus, 1758  self-collected at Titchwell Beach, Norfolk, December 2002. P. pholadiformis is a robust little shell, and very prolific at Titchwell, again boring into the rocks. A group had been picked clean by the birds and I was able to prise them out of the ground at low tide. Its common name is False angel wing. B. candida is very fragile, and often mistaken for P. pholadiformis. However, it has an extra lip at its posterior, and is usually more opaque. 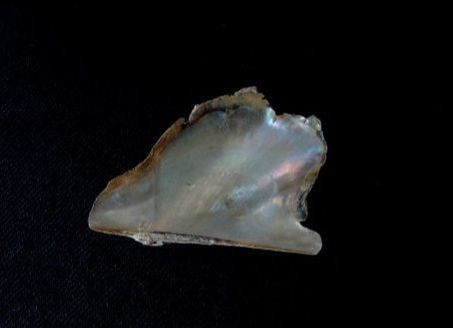 Pteria colymbus Röding, 1758  self-collected at Venice Beach, Florida, 1998. Venice beach is famous for collectors of sharks' teeth. It was yet another wet dreary day (El Nino), and after crouching, pawing through gritty sand looking for a couple of samples, I decided to warm up and walk. Pacing away from the other tourists, at a curve on the beach, I found this shell – by itself – nothing else at all – amazing.