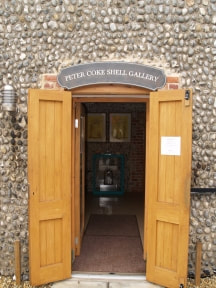 There is a new place to spend rainy afternoons at West Cliff, Sheringham, Norfolk. Down at the beach front, tucked behind the lifeboat museum, are restored longshore fishermen’s sheds with exposed beams and flintwork. This building has been lovingly restored by Sheringham and District Preservation Society and now houses Peter Coke’s amazing shell pictures and sculptures.

The 92 pieces of work have been mounted in glass cabinets or display tables with mirrors to show each part of the collection at its best, at all angles. The walls have been painted the same sea-blue-green that Peter had at Sharrington Shells and so all the works look as stunning as ever.
If you have never seen the pieces, you are in for a stimulating, mind-boggling experience as Peter’s work incorporates many different strands. There are sailor's valentines, pictures of animals, decorated fans, sculptures, decorated small boxes, mirrors and the amazing flower arrangements often with their own decorated vases or under glass domes.
When you first enter the museum, hanging on the left wall is the most amazing intricate face. This grotesque mask is done in the style of Giuseppe Arcimboldo (1527–1593) who painted fruits and vegetables to make portraits. Instead of fruits, this work uses shells from the Conidae family and Dentalium inaequicostatum, opercula and sea coral. This work is one of my personal favourites and inspired me to do my “About Face” face illusions for the Autumn 2006 Show.
The sailor’s valentines are concave towards the centre, showing off all the shells, drawing your eyes in. The concave shape, unique to Peter, gives him the ability to break the usual sailor’s valentine convention of having the largest shells always at the outside. He also excels at using shells with colours from opposing sides of the colour wheel to stunning effect, e.g. yellow and purple. One valentine is a Catherine wheel of green, white and orange. Two valentines are formed from circles within circles; one with blue and white shells from Bahrain, and another showing vivid yellow, pink and white striped Tellina radiata.
Very simple but I know I couldn’t do it, is the picture of the wild cat. The background is in sand, grey grit and crushed shells with black micro shells forming the cat’s shadow. The cat itself is formed out of common small gastropods, such as Bittium reticulatum and broken black shell fragments to create the cat’s spots and stripes. In a similar style with exquisite detail is the stag listening on the edge of a coral forest. Also magnificent are the pair of framed Chinese-style yellow landscapes with flaring branches of pale umber seaweed on which perch exotic birds with clouds of shimmering butterflies swarming in all directions.
There are decorated snuff boxes, a round box with minute mussels and green pea shells, another black oval box covered in Nerita zebra and a pink oval box with soft pink cones and opercula. Sometimes Peter makes a creation as a table arrangement or ornament, such as “Temple of Venus”, which is named after the Venus comb shell from the murex family. This is set on a red platform with red pillars, with white Fusinus, white Murex and little green sea urchins. One box is actually a casket which is revealed from all sides by the mirrors. It is a 17th-century fabric casket, sumptuously embroidered with shells, pearl flowers and foliage in the most heavenly pinks, mauves, pale greens and turquoise blues. Opened it reveals a conservatory filled with wonderfully delicate flowers and a small fountain. 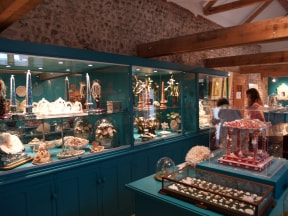 It is hard to choose from all the works, as to which is the most stunning, extraordinary, amazing. I would say the shell flower arrangements are a testament to Peter’s eye for detail of the natural world and selection of the best shell to create flower form. One arrangement is a spectacular seven-tiered floral tower of over 100 varied flower heads and one butterfly. I confess I was so stunned at the 100 flowers, I have yet to find the butterfly. These shell flower petals are made from different Tellina, mussels, scallops, Nucella and blue limpets, whereas sea urchins, urchin spines, small Gibbula or other tiny gastropods form the flower nucleus and stamens. Peter even makes his own leaves. Recognisable are the yellow, pink or peach roses, pink camellias, chrysanthemums, passion flowers and lilies yet all made from shells.
There are postcards of the works for sale, shell books and shells suitable for shell art.
Peter’s work is an inspiration to anyone who has too many shells of one species, or part fragments of specimens, as well as those strange fishy components left on beaches, such as sharks' teeth, jaws, urchin spines, shrimp claws, seaweed and coral. It is a must for anyone who is interested in shell art to see what can be done with time, creativity, patience and lots of artistic flair!
This article by Selina Wilkins was first published in our magazine Pallidula in April 2007. Peter Coke died in 2008, aged 95. For his biography, and for up-to-date information on Gallery opening times and admission, see the website of the Sheringham and District Society.