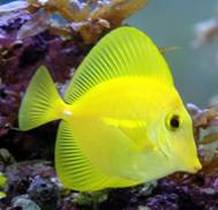 I’d like to introduce you to Norris. Norris is a yellow tang (Zebrasoma flavescens), a surgeonfish native to the central Pacific, and a fish that is popular with marine aquarists like myself because it is quite easy to keep, is long-lived, and is now being responsibly and sustainably collected for the trade. I have had him for two years, and he is quite happy grazing algae from the rocks in the tank and particularly relishes more meaty fare when it is offered. However, recently Norris did something very, very bad.

I guess many of you will know that my shelling interests these days are restricted to the study of the Marginellidae. I have co-authored many scientific papers over the last ten years and I am particularly interested in observing living animals. Some genera exhibit remarkable behaviour (such as parasitism on sleeping parrotfish – but that is another story) and the beauty of the live animal often surpasses that of the shells in which they live. I have always hoped to one day have an aquarium where I could keep, amongst other reef inhabitants, live shells – any shells – and the recent advances in filtration and aquaculture have enabled me not only to keep a few fish and cultivate and grow my own corals, but also to enjoy watching the behaviour of snails such as the detritus feeding Nassarius and Strombus species as they go about their important business as part of the "clean-up crew" in the working ecosystem that is my reef tank. 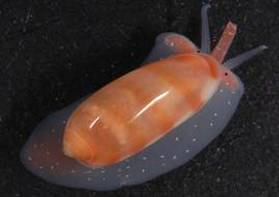 One day I happened to be cleaning out part of the tank system when I noticed a familiar shape clinging to the side of the glass. Well what did we have here but a live specimen of a species of Volvarina (that’s a Marginella genus to the uninitiated)! I was absolutely chuffed, and set about getting a good macro picture of him/her (yes, the sexes are separate in the Marginellidae). What a beauty; the shell was barely 10mm long, and the animal had a transparent pinkish foot with tiny white spots and black eyes (the eyes are always black in Marginellids). Actually this is a very common pattern in Volvarina, and doesn’t help much with identification. After the photoshoot, I carefully placed the animal back on the aquarium rock where I wanted to watch to see where he went, and how fast he could move. Suffice to say that I saw exactly where he went and can vouch for the fact that he definitely did not move fast enough. Enter our friend Norris, stage right. He took a look and down went Mr. Marginella in one gulp, to my total dismay. I immediately began to think of ways of encouraging a fish to regurgitate (short of giving it a squeeze and shouting loudly at it like Basil Fawlty) but as I knew he would be impossible to catch I had no option but to let nature take its course. Two days later, sure enough, there lying on the sand was the empty shell, which I duly collected. This is probably a record on several fronts; First, how many shellers have actually collected a shell useful for their collection in their front room whilst having a beer and watching an episode of Morse on the telly? Secondly, I am now the proud owner of an ex-pisce (pronounced "ex-piskay" and meaning having been taken from inside a fish) shell, having personally known the victim (albeit briefly), and being on first-name terms with its predator!
So, what is there to learn here, apart from the obvious non-compatability issues? Here is a picture of the shell. Notice how Norris’ digestive acids have etched the glossy shell surface to a dull matt, except the lip or margin, which curiously remains shiny. I can only assume that this part of the shell is much more densely mineralised than the rest of it, or the glaze laid down by the animal is that much thicker here. I have subsequently found two other empty shells in the tank – one dulled and obviously ex-pisce too, but the other a perfect gem – presumably the one that got away and just died of old age. I use a natural filtration system in my tank comprising live rock and a deep sand bed. I can only assume that these specimens were hitching a ride on the rock when it was collected in Fiji, and managed to outwit Norris for a year and a half before he caught them out in the open.
Weirdly, at about the same time as all of this was going on, I received a packet of Volvarina shells from the Artis Zoo Aquarium in the Netherlands. They were the same species as I found in my tank, and were apparently breeding rampantly and infesting their tanks. I was asked for an identification, and I helped as best I could but I could only narrow it down to being a member of the complex of indo-Pacific species including Volvarina micans Petit and Volvarina compressa Reeve. Having said that, another close Marginella colleague thinks it more likely to be from the Caribbean.
So, I’ll keep looking in my aquarium for other molluscan exploits, though I doubt that I’ll top this one. But you never know…..
This article by Andy Wakefield was first published in our magazine Pallidula in October 2008.