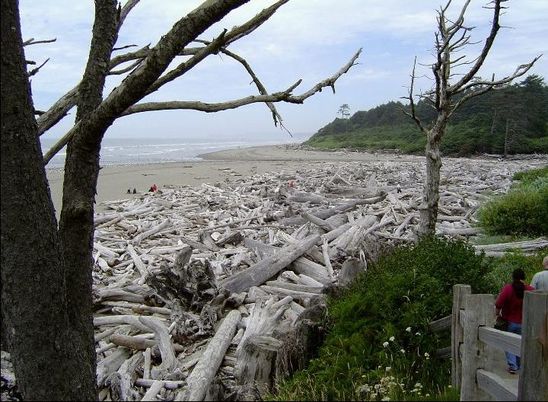 The north-west coast of the USA, from the Washington–British Columbia border in the north to the Oregon–California border in the south, may not seem one of the world's prime shell destinations and indeed it is not, but as usual, an interest in marine mollusca added greatly to our holiday.

Surf-torn beaches  Hiring a camper in Seattle, we first set off for the Olympic National Park, an isolated forested peninsula, forming the most north-westerly part of the USA (excluding Alaska!). The coast is a wild landscape of surf-beaten beaches and tumbling streams; the rainfall is very high. Accessing the beaches proved to be a considerable challenge on account of the massive amount of driftwood piled up on the shore. Made of huge trees this obstacle required care to climb across. The beaches were strewn with dead "Dungeness" crabs in extraordinary numbers but the only shells in evidence were fine specimens of Pacific razor-clams, Siliqua patula and occasional single valves of surf clams, Simomactra falcata. This type of beach typified the exposed sandy beaches right down to the California border of Oregon with no perceptible change in shells, or lack of them!!
Clam fisheries  Siliqua patula, along with the butter clam, Saxidomus gigantea, the pacific littleneck, Protothaca staminea, cockles of the genus Cliocardium and the horse clam or summer clam, made up of various Tresus species, have been of considerable importance both to indigenous people and to the early European settlers.
Tresus cepax and Tresus nuttali were known by the native peoples as summer clams as they were typically harvested at this time of the year, cooked, dried, skewered on waxberry stems and packed in cedar boxes to be used for food and trade.(1) The shells had a variety of uses as ladles and measures. They were also known as otter shells to the sea otter hunters as they formed an important part of the otters' diet. They are still fished commercially by divers in British Columbia and by amateur diggers.
The first commercial clam production dates back to 1882 when a cannery was set up at Rivers Inlet to can butter clams using the salmon-canning process developed at the time. By the early 1900s several canneries existed using wooden steamers and hand-soldered steel cans. The canneries used this process to pack fruit and berries, clams and salmon according to season. It was such hand-soldered cans that probably resulted in the demise of the 135 men on the expedition led by Sir John Franklin to the Arctic in 1845 due to lead poisoning.(2) The highest landings on record are for 1938 when 7.7 million lbs of butter clams were processed. 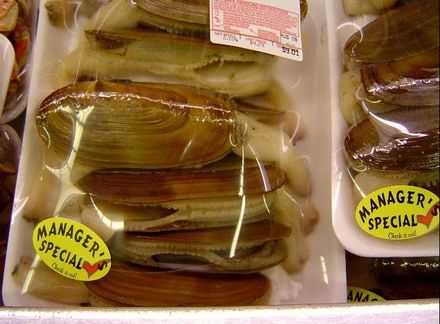 Razor clams were first canned in 1923 (1) at Tow Hill near Masset in the Queen Charlotte Islands and in 1925 1.7 million lbs were landed. Current annual harvests are in the region of 330,000 lbs. They are difficult to dig as the density of clams in the sand is only 1–2 per square metre. Since the 1970s the species of choice for the canning industry have varied according to availability and taste. From the 1920s to the 1970s butter clams and razor clams were the most popular but in the 1980s interest shifted to live "steamers", especially the manila clam (Venerupis philippinarum) and the pacific littleneck. In 1988 8.6 million lbs of manila clams were landed. In the late 1970s subtidal fishing was established for Tresus species and for the pacific geoduck, Panopea abrupta, with landings of 12.6 million lbs in 1987.
In addition to all of this several species of oysters, clams and scallops are cultured along the Washington and Oregon coasts. We sampled the excellent oysters and found razor shells for sale prepacked in local supermarkets. 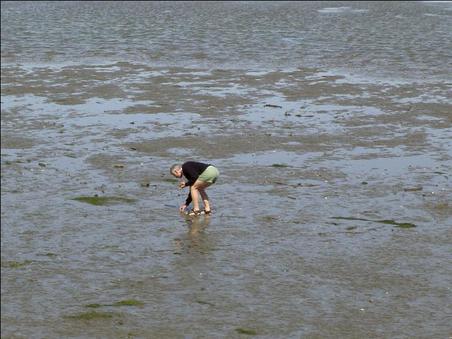 Calm inlets  Many rivers, including the massive Columbia River, enter the sea down this stretch of coast and a succession of large bays and inlets provide a calm habitat away from the incessant pounding of the Pacific Ocean. Oyster fisheries abound and large succulent fresh oysters were one of the culinary delights of the trip. In addition we were able to collect Venerupis philippinarum from the calm beaches and from piles at campsites left by amateur diggers. This species, first recorded in British Columbia in 1936, was introduced to the Pacific coast of North America from Japan with pacific oyster seed and has now become very widespread. Indeed it has been the main species harvested by the intertidal clam-fishing industry since the 1980s and is said to taste better then the native Protothaca staminea of which, sadly, we saw no specimens.
At North Bend in Oregon I was able to tramp across mud flats covered with fine specimens of Clinocardium nuttallii both alive and dead. Although we saw this species in many places, nowhere were they so large or abundant as here. Despite the great temptation we did not eat our catch owing to concerns about shellfish poisoning (see below). 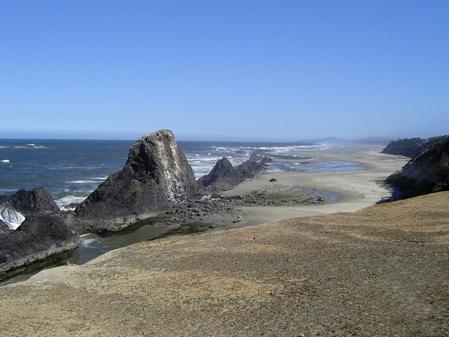 Wave-hammered rocks and pools  Like the exposed beaches the spectacular rocky shores of this coast seem to be always beaten by a fierce sea. Shells were abundant but represented by a very limited number of species. Large colonies of the California mussel, Mytilus californianus, were common but were the only mussels that we saw. The limpets Lottia digitalis and Tectura persona hugged the exposed rocks high on the shore, while Tectura scutum lived in rock pools in the intertidal zone.

Nucella lamellosa appeared in large numbers in the sand around rocks when the tide went out. In the more sheltered areas they were ornamented by several rows of axial frills (hence their common name "frilled dogwinkle") while in exposed places they were worn smooth and resembled beach-worn shells, although clearly living happily in this hostile environment. On rocks we found Nucella canaliculata and more commonly Nucella emarginata. We found very few dead shells either on the beach or in rock pools as it seemed the sea smashed them to powder in no time.
Shell shops  We found a couple of shops selling shells. One serving our campsite had the usual Indo-Pacific material but surprisingly amongst these I found a few Strombus peruvianus and purchased a fine specimen for only $2. In Florence we found a shell museum with a fine display of local and worldwide shells selling material from several parts of the world. We were able to buy good specimens of the locally caught Oregon triton, Fusitriton oregonensis and Haliotis kamtschatkana.
Limits on collecting  In Oregon most beaches had a catch limit for various species of mollusc posted on boards. Presumably the limit was per day but this was not always specified! For example:
• butter, littleneck, cockle and gaper: 20 of which 12 may be gaper clams
• mussels: 72/day
• scallops: 24/day
• piddocks: first 36 regardless of size or condition
• all other marine invertebrates: 10 in aggregate
Natural hazards of the North West Pacific coasts  Widespread signs warned of the dangers of tsunami and exhorted us to rush to high ground in the event of earth tremors. This coast is bounded by the complex faults created by the Pacific plate colliding with the North American plate and although major flooding has not occurred recently it has in historical times.
Perhaps more interesting to conchologists were the frequent signs warning of shellfish poisoning with a shellfish harvest hotline to check safety on a day-to-day basis. We were interested to learn more of this phenomenon from the informative beachside boards. Toxic illness caused by shellfish has been recognised for several hundred years and Native Americans are known to have warned early settlers to avoid shellfish during the summer months. Since that time, at least four distinct shellfish-poisoning syndromes have been identified which share some common features and are primarily associated with the consumption of bivalve molluscs (e.g., mussels, clams, oysters, scallops) which are filter feeders and accumulate toxins produced by microscopic algae. Blooms of these algae cause "red tides" that colour the sea red by their sheer quantity. The toxins responsible for most shellfish poisonings are water-soluble, heat and acid-stable, and are not inactivated by ordinary cooking methods.(3, 4) 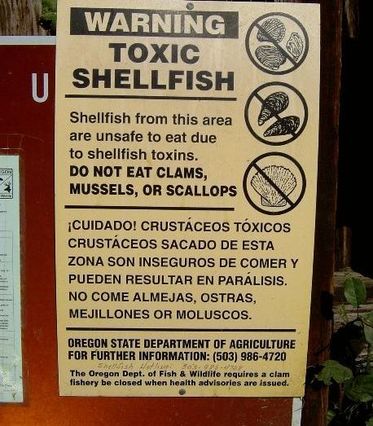 Paralytic shellfish poisoning, the most common, is caused by a group of poisons which are derivatives of saxitoxin, 10,000 times more poisonous than cyanide, produced by the dinoflagellate species Alexandrium catenella and A. acatanella. The toxin is concentrated by all bivalves which may be toxic when the red tide is around. Oysters and clams can retain lethal levels of toxin for 4–6 weeks after the algal bloom has passed and some such as butter clams have been shown to be toxic for as much as two years. The disease results in paralysis which may involve the respiratory muscles causing death. Even the early settlers recorded the illness. The Russian Baranoff expedition lost 100 men in 1799 after they ate mussels in Alaska at a place subsequently named Peril Strait! Poison Inlet in British Columbia was similarly named after another outbreak in 1793. Now most cases have involved recreational shellfish collectors, not commercial vendors. Since 1927, a total of 500 cases and 30 deaths have been reported in California. That PSP can be a serious public health problem, however, was demonstrated in Guatemala, where an outbreak of 187 cases with 26 deaths, recorded in 1987, resulted from ingestion of a clam soup.
Neurologic shellfish poisoning causes nervous and gastrointestinal symptoms. It is caused by brevotoxins which are polycyclic ethers made by the dinoflagellate Ptychodiscus brevis. Diarrheal shellfish poisoning, results in severe diarrhoea and is caused by okadaic acid which binds to intestinal epithelial cells and increases their permeability in a way analogous to cholera toxin. This toxin is made by dinoflagellates of the genera Dinophysis and Prorocentrum. These two syndromes are less severe with no known fatalities and for this reason the frequency of cases is poorly recorded.
The only reported outbreak of amnesic shellfish poisoning in humans occurred in 1987 when 156 cases of acute intoxication occurred as a result of ingestion of cultured blue mussels (Mytilus edulis) harvested off Prince Edward Island, in eastern Canada; 22 individuals were hospitalised and three elderly patients eventually died. Gastro-enteritis followed by headache and short-term memory loss occurred. In a few cases severe cognitive dysfunction, similar to Alzheimer's disease, interfered with the patients' ability to perform normal daily activities. This did not recover and irreversible damage to the brain was found at autopsy. The toxin is demoic acid, an analogue of the neurotransmitter glutamate, produced by the phytoplankton Pseudonitzschia pugens. In California in 2001 many seabirds died from consuming anchovies which had fed on Pseudonitzschia australis and in 2002 500 sick sealions came ashore with demoic acid poisoning due to eating fish that had eaten the algae; many died.
References
1. Much of the information for this article comes from the excellent book by Rick M. Harbo (1997), Shells and Shellfish of the Pacific Northwest: A Field Guide (Harbour Publishing: PO Box 219, Madeira Park, BC V0N 2H0, Canada). ISBN 1-55017-146-1
2. http://www.mysteriesofcanada.com
3. http://www.emedicine.com/EMERG/topic528.htm
4. http://vm.cfsan.fda.gov/~mow/chap37.htm