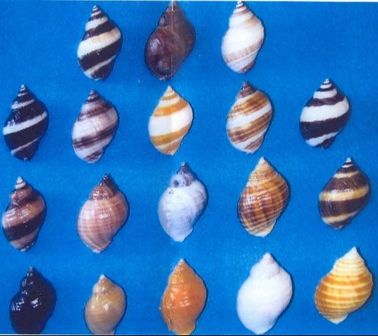 It was way back in 1971 when I first visited Newquay on a family holiday. We stayed at the Edgecombe Hotel. About 18 years later, my interest in British minerals took me back to Newquay on a "mineral collecting" interest holiday organised by Sheila Harper and Stephen Hebdage at the Chichester Guest House. Sheila and Steve had a shed attached to the back of the house with microscopes and rock breakers, etc.
For the next 11 years, I made return visits twice a year in the Spring and Autumn and amassed a large collection of Cornish minerals.

Three years ago I teamed up with Derek Howlett and we decided to have a week in Cornwall, shell collecting, where better to stay than Chichester Guest House. We selected a week in November when the low tides were at an appropriate time of the day, and off we went. I think Derek was amazed by the hospitality, entertainment and facilities in the shed for preparing and studying our finds.
From my very first visit to Newquay in 1971 I recollected seeing banded Nucella lapillus on two large rocks protruding from the sand which were covered by the sea at high tide. After studying Steve's old postcards, we concluded they were on Towan Beach (Newquay has five beaches), so the following day we went to explore at low tide. The rocks were just as I remembered and they were still covered with masses of Mytilus edulis and standing out like beacons were the large Nucella lapillus, some of which are illustrated. The size of the illustrated specimens varies from 35mm to 38mm. There was also a variety of colour forms on the cliffs but for some reason they were all a lot smaller and not as attractive
Nucella lapillus was first described by Carl Linnaeus 1758, and since than some authors have given various names to the colour forms, such as "bizonalis" for the dark banded form and "castanea" for the dark brown form but I have not seen any attempt to name all the other various colour forms.
In my own collection, I have 109 specimens of this particular species of which the vast majority come from Cornwall. To my knowledge, there is no other location within the British isles or Ireland where any colour form other then the white or orange forms occur. I would be interested to know if anybody knows of any other sites ?
Nucella lapillus is a widespread species and occurs from Norway to Africa and long the east coast of North America, and recently in the COA magazine was an article on the Nucella of Nova Scotia, showing some of their colour variations.

Derek and myself returned to Newquay last year and plan to go again in the Autumn this year. Above is a picture of the actual rocks on Towan Beach where the photographed specimens were collected.
This article by John Fisher was first published in our magazine Pallidula in October 2003.
For photographs of John Fisher's Nucella and many other British species, see his website.