by John Batt
Photography by John Batt
In early September 2003 we set off on our long-awaited trip to what many people call the end of the earth, the beautiful subtropical island of Grande Terre, New Caledonia.
Both my wife and I along with my parents arrived in Sydney, Australia some twenty hour after our departure from Heathrow, including a one-hour stop in Singapore for refuelling. We had decided to stay and recover in Sydney for five days with my wife's cousin who lives near Bondi. He was more than happy to act as our guide and show us the usual tourist sites in and around the city. On our first day we decided to visit the Opera House, botanical gardens and Sydney Harbour Bridge and over the following four days visited the Koala Park, Blue Mountains, Sydney Aquarium, and took a boat trip around the harbour. We searched Sydney high and low for shell shops but never came across any. I did have the address of one but when we eventually found the place it had closed down. On our last night we had dinner in the restaurant at the top of the Sky Tower to try such delicacies as kangaroo, emu and camel, and then returned to Bondi to pack for our onward flight the next morning to New Caledonia.
Our flight with Air Calin departed from Sydney at 11am and we arrived at our hotel, the Kuendu Beach Resort at 3pm. The resort is about ten minutes' drive from the capital Noumea and about one hour from Tontouta international airport. New Caledonia is a French Pacific territory in Melanesia. The main island of Grande Terre is the fourth largest island in the South Pacific after New Guinea and the north and south islands of New Zealand. It is about 400km in length and 50km in width and is surrounded by the second largest barrier reef in the world after Queensland's Great Barrier Reef, but New Caledonia's lagoon is the world's largest.
We stayed in a traditional palm-thatched pillared bungalow with all of the necessary self-catering facilities and colour TV. I awoke at about 6am on our first morning and was far too excited to wait for Goga (the wife) to get up, so I slipped off down to the beach to see what I could find. The sea was quite choppy and had washed up many Bluebottle jellyfish, along with hundreds of Spirula spirula L., 1758 and as many Janthina janthina L., 1758 as you could wish to collect, still alive with the bubble sacs attached. I found a live Ficus subintermedia Orbigny, 1852, a couple of Strombus mutabilis Swainson, 1821 and picked my way through hundreds of beached bivalves, most with both valves and many in good condition. After a couple of hours I returned to our bungalow to freeze the live specimens and get myself ready for our morning trip to Noumea.
As a cowry collector my main interest in visiting New Caledonia was to collect melanistic and rostrate cowries (I will refer to these as M&R in the text). Many of the 44 known species to be found M&R can be collected in shallow water so I hoped that I would get lucky and find some on this trip. Realising the rarity of these shells I knew I would have to purchase the majority from the various dealers and shops in the city. On our way to Noumea I spotted a shop called Caldoshell Creations but was unable to stop as we were on the hotel shuttle bus, but I knew that once we had our hire car we would be free to do as we pleased.
On arrival in Noumea we changed up some money and set off in search of some new specimens for my collection. We headed straight for the market at Port Moselle and found many stalls selling native crafts and an amazing fish market with some of the strangest looking fish I had ever seen. Luckily there was a stall selling specimen shells and they had a lovely assortment of M&R cowries including some splendid specimens of Leporicypraea mappa viridis "montrouzieri" Dautzenberg, 1903. They were, however, a bit top heavy in the price department so I thought I would hold on and see what else I could find around Noumea. Walking back from the market we spotted a shop called Ocean Distributors and this is where I purchased the cowries pictured below.
From here we went to pick up our hire car to return to Kuendu for an afternoon on the beach. After a great day we decided to go for an evening meal in the hotel restaurant followed by a win for me against my mother in the all-new South Pacific Scrabble Championships – there is not much to do in the evenings at Kuendu! 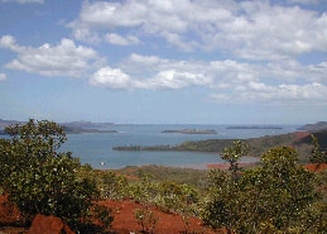