A new subspecies of Cypraeovula capensis
occurring off the coast of the Eastern Cape, South Africa

by Alan Seccombe
Photography by Alan Seccombe
In recent years, several specimens of a distinct subspecies of Cypraeovula capensis have been found in 100m of water off the north-eastern coast of South Africa, from East London to Mbotyi, Transkei. A specimen was illustrated by Lorenz (2002) from 120m off Mbotyi, Transkei. W.R. Liltved (2001) also referred to dwarf deep-water specimens of Cypraea capensis.
The deep-water specimens off East London appear to represent a homogeneous sustainable population, which is herein described as a new subspecies.
Cypraeovula capensis profundorum ssp. Nov.
Animal  Although live specimens have been collected, the details of the living animal have not been recorded in detail. According to the collector of the shells, the animal was light yellow/cream in colour. The mantle was smooth without papillae. Foot, eye stalks and siphon paler colour. The animal of a live-collected shell has been preserved for future study.
Shell  Small to medium-sized for a Cypraeovula, dorsum inflated, heavily ribbed and not particularly glossy. Base and labrum not glossy, and covered by prominent evenly-spaced ribs. Aperture narrow, slightly curved posteriorly. 19–20 prominent labral teeth. Spire is umbilicate and protoconch clearly visible in some specimens, although in others it is covered by horizontal striae.
Fossula has 4–6 "teeth" and basal ribs continue onto fossula. Basal ribs continue onto lower margins and cross the dorsum.
Ground colour of dorsum apricot, through beige to pale lilac. Most shells are immaculate although a few have small brown blotches in the middle of the dorsum, and a few specimens had faint brown spots widely distributed over the dorsum.
Faint or absent mantle line on the dorsum. Base and labrum more or less the same colour as the dorsum, although in some cases exhibiting a darker colour, with the labral ribs a darker colour.
Type locality and deposition data  On flat reef off East London, Eastern Cape, South Africa, 98–110m depth.
The holotype and paratypes A and B are lodged in the Natal Museum, the rest of the specimens are in the collection of the author.
Distribution and habitat  Cypraeovula capensis profundorum is only known from localities off East London, South Africa to Mbotyi in the Southern Transkei at depths of approximately 80–120m. Specimens have only been collected by dredging and the habitat of the living animal has not been observed.
Several other species of Cypraeovula, namely an undescribed species similar to "perdenata" and "iutsuina" named by Raybaudi were collected in the area and depth, as well as Cypraea connelli.
Etymology  The new subspecies is named profundorum to reflect the fact that it is found only in deep water.
Discussion  Cypraea capensis Gray is a very well-known species, and common in depths of 15–20m on reefs in Algoa Bay. Typical capensis vary considerably in length, most commonly in the range 26–33mm, with smaller and larger shells occurring, and in the degree of dorsal blotching, although most have dark dorsal blotching. Most shells are elongate and not inflated. A dwarf specimen of a typical capensis (19.5mm) is illustrated in Figure F.
Massier (1993) described gonubiensis from shallow water off East London, which is characterised by its dark purple/lilac colour when fresh, but in most other respects, indistinguishable from typical capensis. Whether gonubiensis represents a valid subspecies is unclear. A specimen of gonubiensis is illustrated in Figure G.
A large deep-water form has been collected by crayfishermen and trawlers in the Algoa Bay area. Specimens exceed 40mm, but are clearly recognisable as capensis, and are distinguished from typical by being larger and slightly paler in colour. Most have dorsal blotching. Other forms have been taken from crayfish pots in Algoa Bay which are more ovate than the typical form, but not really much larger, and were termed "sphaerica", although it appears not formally described.
The subspecies being described is none of the above, and appears to be a relatively homogeneous population occuring on reefs in deep water. It can be distinguished from the typical capensis by the size, the lack of or reduced dorsal pattern, the background colour and the length-to-height ratio which exceeds 2 in typical capensis, and is less than 1.9 in the new subspecies.
References
Liltved, W.R. (2000), Cowries and their Relatives of Southern Africa (second enlarged edition) (Sandstone Editions)

Liltved, W.R. (2001), Supplement to Cowries and their Relatives of Southern Africa

Figure A: Holotype
Figure B: Paratype A
Figure C: Paratype B 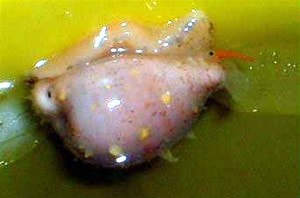 Figure K: living specimen of elongate form of Cypraea capensis from Port Alfred
This article by Alan Seccombe was first published in our magazine Pallidula in October 2003.