The late R. Mike Filmer was an eminent collector and authority on the genus Conus. After 35 years, during which he lived in Australia, Philippines and many other Asian areas, he had built one of the finest cone collections. In 2001, he published a book on the taxonomy and nomenclature of living Conidae. Here you see a selection from his first conus to the rarer and challenging specimens in his collection. 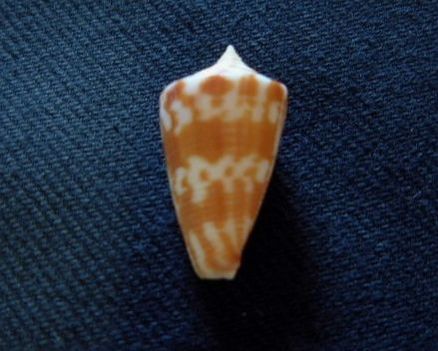 Conus dampierensis Filmer & Coomans, 1985  This new species was named and described by myself and Dr Henry Coomans in Beaufortia, a publication of the Zoological Museum of Amsterdam in the Netherlands. The holotype is in the Zoological Museum of Amsterdam. The type locality is Dampier, North Western Australia. The species is endemic to this region. This shell was known, erroneously, for some years as Conus tegulatus Sowerby, 1870, which is a juvenile of Conus inscriptus Reeve, 1843. The pictured specimen (29.6 x 13.9mm) is a paratype in my collection. 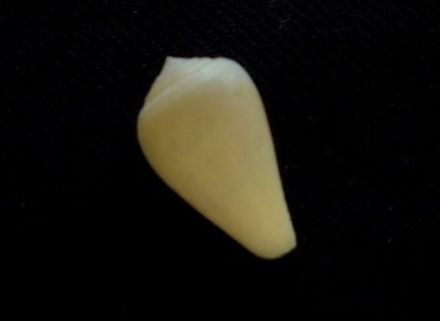 Conus filmeri Rolán & Röckel, 2000  This new species is named after myself. The description appeared in the publication Argonauta XIII (2), p. 35. The holotype is in the Staatliche Museum für Naturkunde in Stuttgart, Germany. The type locality is Saco Mar in southern Angola and to date this species is not known to occur at any other locality. The pictured specimen (23.9 x 13.6mm) is in my collection along with a paratype. 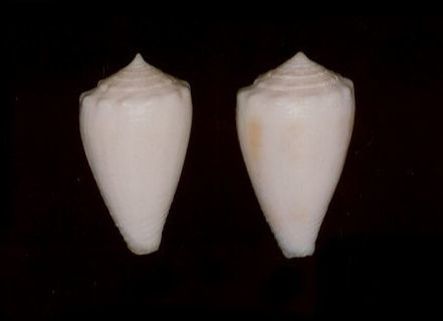 Conus boeticus meleus Sowerby, 1913 These two shells (27 x 15mm) are from Augustus Island, North Western Australia and were found in sand and weed at low tide. C. meleus is presumed to be a colour form of C. boeticus Reeve, 1844. Since 1977 when I obtained these two shells from an Australian collector, who had collected them himself, I have not seen another specimen nor have I heard of one. The holotype (29 x 15mm) is in the BMNH and its type locality is Kii in Japan. I am showing these two specimens because of their rarity: one of these two is also shown in the Manual of the Living Conidae by Röckel, Korn & Kohn on pl. 70, fig. 3. 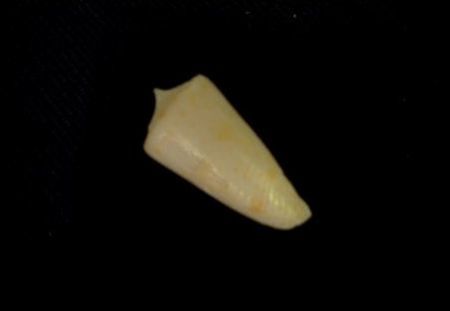 Conus ciderryi da Motta, 1985  This species is very rare hence it is pictured here. The original description in Publicaçoes Ocasionais da Sociedade Portuguesa de Malacologia, Lisbon, Portugal mentions only four specimens. The specimen pictured is paratype number 3 (32 x 16mm) and was given to me by Bob da Motta in June 1987. Since I acquired it I have not seen or heard of another specimen and although the other two paratypes were supposed to be in da Motta's collection they were not present when I examined his collection, which is now in Stuttgart. 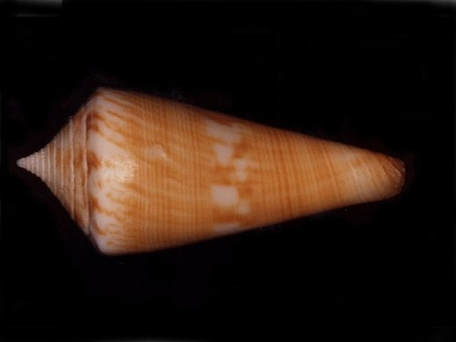 Conus species  I acquired this very unusual cone (29.5 x 13mm) in 1980 from an Australian dealer who himself got it from an old collection. The specimen was said to have been found off Aru Island in eastern Indonesia. There is one other specimen from the same locality in the Zoological Museum of Amsterdam. This specimen in my collection is figured in the Manual of the Living Conidae on pl. 73, figs 7 & 8. As only two of these shells are known at present I decided not to introduce a new taxon, with which decision Robert Moolenbeek of the Zoological Museum in Amsterdam concurred. 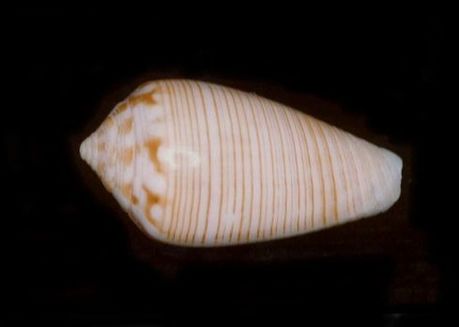 Conus scalptus Reeve, 1843  This specimen (22.8 x 11.8mm) in my collection was obtained from fisherman in Cebu in the Philippines in August 1977. I feature it here because this species is almost always misidentified. On dealers' lists it is most often confused with the common Conus mucronatus Reeve, 1843. The true species is very rarely found. 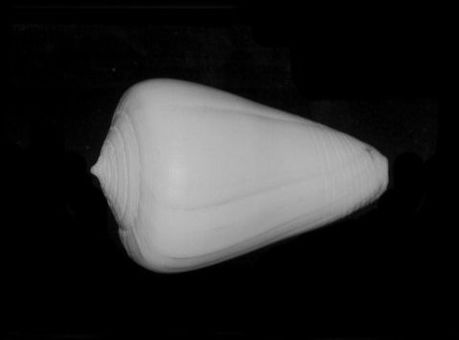 Conus eburneus form turbinatus Sowerby, 1858  The true nature of this taxon is uncertain. The holotype in the BMNH differs somewhat from the figure in Sowerby. The pictured specimen (41.3 x 26.9mm) in my collection comes from Malaita in the Solomons; it is close to the holotype and is I believe a colour form of C. eburneus Hwass, 1792. The figure in Sowerby is most like C. eburneus. However some authors consider C. turbinatus to be a form of C. suturatus Reeve, 1844, a species not known to occur in the Solomons and one which always possesses a basal stain not present in the holotype or in my specimen. 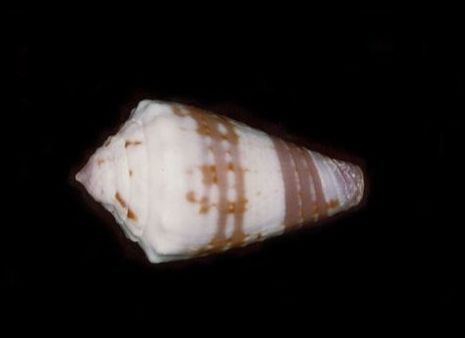 Conus sphacelatus Sowerby I & II, 1833  This species has been and still is something of a mystery. Sowerby's lectotype (19 x 10mm) is in the National Museum of Wales and no type locality was mentioned. The species is presumed to be from the Caribbean area and the pictured specimen (19.3 x 10.8mm) is from The Bahamas and seems very close to the type. This species appears to be very closely related to Conus speciosissimus Reeve, 1848 and Conus ornatus Sowerby, 1833 (see below) 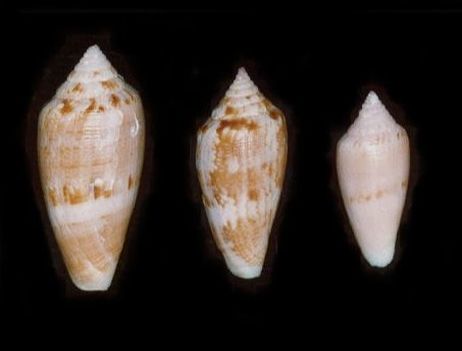 Conus compressus Sowerby, 1866  These specimens (28.7 x 12.3mm on the left and 20.7 x 8.5mm on the right) are from Wallabi Island, North Western Australia and are the true Conus compressus. The much larger specimens with an extruded spire often depicted as C. compressus and mostly from South Australia are actually Conus carmeli Tennison-Woods, 1877, which is a colour form of C. anemone Lamarck, 1810. 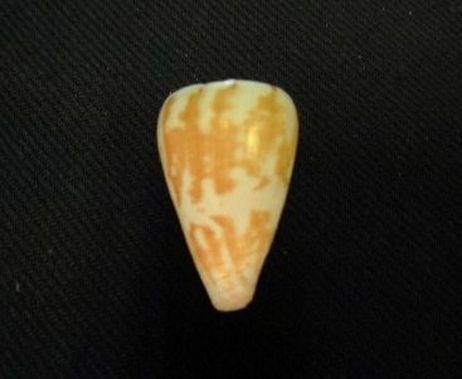 Conus lischkeanus tropicensis Coomans & Filmer, 1985 This subspecies was for many years incorrectly called C. kenyonae Brazier, 1896, which is a sub-adult form of C. distans Hwass, 1792. The subspecies, which occurs in the Indian Ocean, differs from the Pacific Ocean subspecies C. lischkeanus kermadecensis Iredale, 1912. Pictured is a specimen in my collection (34.6 x 21.3mm) from Cardabai, Western Australia. 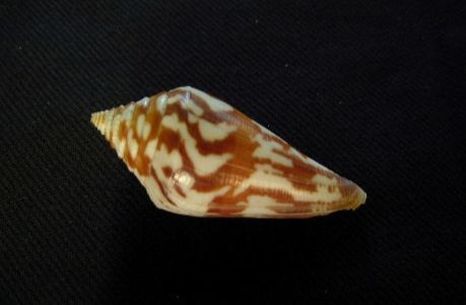 Conus darkini Röckel, Korn & Richard, 1993  This is a very rare shell, which is attractively coloured. This specimen (57.5 x 25.2mm) was trawled in 325m on the Kito-Koho Bank in the North Philippine Sea, an area very rarely visited by trawlers. A specimen from the same area is shown by Röckel et al. in The Manual of The Living Conidae, pl. 27, no. 24. 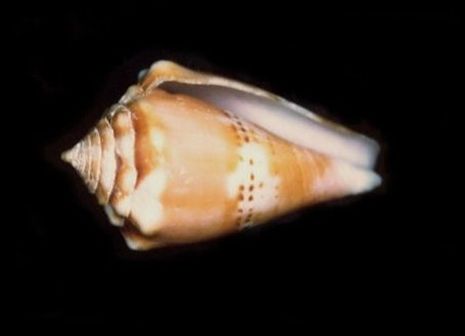 Conus hamamotoi Yoshiba & Koyama, 1984  This is an extremely rare and attractive little shell from Japan. This is the holotype (23 x 13.7mm) from the Wakayama Prefectural Museum in Wakayama, Japan. Five specimens were dredged in 60–70m, one to 1.5 km west of Ogokuda Beach, Kushimoto-machi, Nishimuro-gun in Wakayama Prefecture. In the mid-1990s I visited the Wakayama Museum and studied the types. I was also able to discuss this species with Dr Koyama, the junior author; he told me that to the best of his knowledge no other specimens had been found. I do not have this species in my collection. 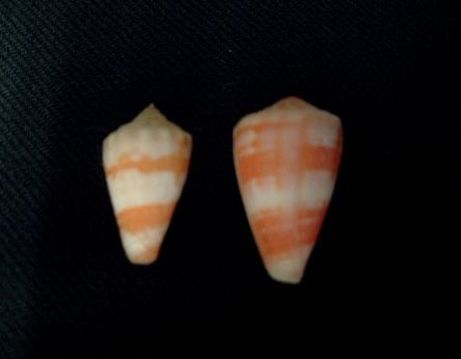 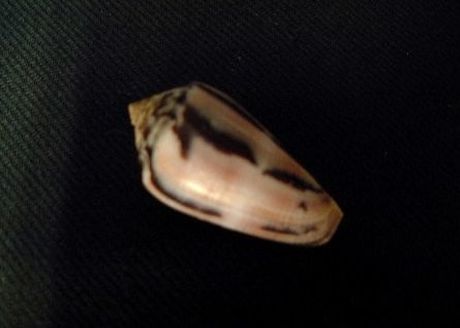 Conus fulmen Reeve, 1843  This specimen (39.5 x 19.8mm), found on the beach on Lamma Island off Hong Kong in 1968, after a typhoon, was the very first cone that I found myself. It therefore is, for me, special. During the next 35 years I have accumulated by various means 9,300 specimens of the genus Conus. 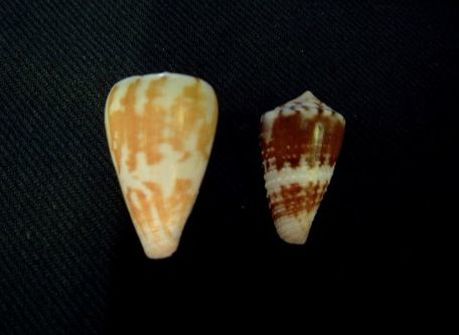 Conus lischkeanus tropicensis Coomans & Filmer, 1985  The right-hand specimen (31.5 x 16.7mm) is from Southern Mozambique and may be a distinct subspecies occurring in Mozambique. It is smaller and much darker in colour. It is also pustulose at the base, which the specimens from Oman, South Africa and Western Australia are not.