Shells from the kitchen waste of Mabul, North Borneo 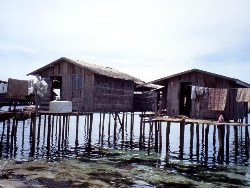 Mabul is a small island (0.5 miles in circumference) situated off the north-east coast of Borneo. We went to Mabul, and the nearby island of Sipadan, to go scuba diving. This is one of the most spectacular dive sites in the world where it is possible to swim with numerous giant turtles and the coral wall, only a few yards from the beach, drops vertically to a depth of some 6,000 ft. We stayed there in a "hotel" built, like the villages, on stilts on the coral in the water.
There is only one village on Mabul inhabited by "illegal" Vietnamese boat people. Despite extreme poverty they all seemed in good health living off the sea. It was clear that marine molluscs formed a major part of their diet. From the shells we found and were given, the diet seemed to consist of any mollusc that could be caught, but huge numbers of empty shells of Haliotis asinina Linné, 1758; Strombus luhuanus Linné, 1758; Lambis lambis (Linné, 1758); Cymbiola vespertilio (Linné, 1758) and Hippopus hippopus (Linné, 1758) were to be found under the huts. The live shells were collected in grass baskets by children wading on the shallow coral reefs and also caught in the fishing nets. It is interesting that large and poisonous cones were also on the menu.
Despite it being a reserve, collecting of beach shells is not prohibited, but purchasing of shells from the locals is discouraged. This gave rise to the interesting situation of the locals happily giving us shells that they had discarded after eating the animals. Not only that, but we were able to walk under the huts on stilts and pick up fine "live caught" specimens that had been thrown down from the kitchens. The village dump contained many large specimens of Hippopus hippopus (Linné, 1758). Rather distressingly we were even offered a large live Nautilus pompilius Linné, 1758 by some children.
With the curbing of the shell souvenir market and "a gather what you can eat approach", we estimate that the village probably has a population of 300–400 supported entirely by the surrounding sea and coral reefs. Growth in the population will continue to challenge the ability of the reef to regenerate its fish and mollusc stocks. The minimal demands of shell collecting on the mollusc population by the visitors are put into perspective.
This article by John, Jenny, Alex and Charlotte Whicher was first published in our magazine Pallidula in April 2000.
Species found discarded on Mabul
Conus distans Hwass, 1792
Chicoreus ramosus (Linné, 1758)
Conus vexillum Gmelin, 1791
Conus quercinus Lightfoot, 1786
Conus marmoreus Linné, 1758
Cymbiola vespertilio (Linné, 1758)
Lambis lambis (Linné, 1758)
Pleuroploca trapezium (Linné, 1758)
Strombus luhuanus Linné, 1758
Trochus niloticus Linné, 1767
Hippopus hippopus (Linné, 1758)
Periglypta reticulata (Linné, 1758
Periglypta chemnitzi (Hanley, 1844)
Spondylus squamosus Schreibers, 1793
Tridacna squamosa Lamarck, 1819
Tridacna crocea Lamarck, 1819
Tridacna maxima (Röding, 1798)
Haliotis asinina Linné