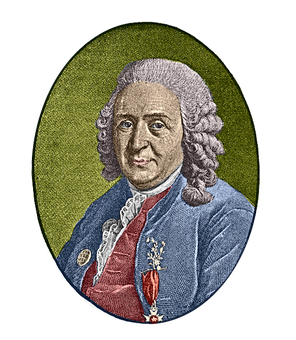 Carl or Carolus Linnaeus was born in Sweden in 1707. From an early age he was interested in plants and their names, and while still a student became a lecturer in botany at Uppsala University after writing a paper on the classification of plants (though officially he had gone there to study medicine). In the early 1730s, while researching Lapland’s natural resources, he developed his ideas on classifying the living organisms he found there and used a standardised method for naming them.

This was binomial nomenclature, under which system each individual species has a unique two-part name; both parts are in Latin, the first generic (the genus) and the second specific (the species). Latin was already used in scientific nomenclature to avoid the confusion that might arise from the use of local names, but Linnaeus applied it more concisely and consistently and through his practice and teaching established the binomial system as the accepted convention.
After further travel in Holland, Germany, France and England – during which time he also published books and scientific papers – Linnaeus returned to Sweden, first as a doctor and then as professor of botany at Uppsala. He was appointed chief royal physician in 1747 and in 1758 was knighted, becoming Carl von Linné (in scientific nomenclature his name still sometimes appears as "Linne"). His later books Species plantarum (1st edition, 1753) and Systema naturae (10th edition, 1758) are accepted as the basis for modern botanical and zoological nomenclature; the latter is relevant to molluscs. Linnaeus died in 1778.
A popular teacher, Linnaeus was extremely influential through his work on the identification, classification and naming of living organisms (taxonomy). Altogether he named more than 12,000 species. He was also one of the first scientists to pay attention to the relationships between living things and their environments (ecology). His library and collections of plants, insects and shells are now in the care of the Linnean Society of London.