Shell collecting in The Gambia 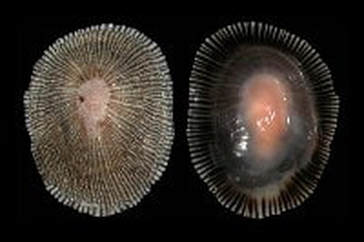 Siphonaria pectinata Linné, 1758
As planned, two days later we made our second visit to Gunjur. Everybody was expecting us and from the moment we hit the beach we were swarmed with villagers eager to sell us the shells they had collected – beautiful ribbed cockles, many pen shells and Circomphalus clams. I even managed to get a lovely specimen of Murex duplex Roding, 1798, for about 7 pence – yes, I drive a hard bargain indeed! Our journey back to base saw a little detour to the small village of Tanje further up to coast. Tanje proved to be most disappointing and apart from many tiny scaphopod shells we failed to collect anything worthwhile. However, it was most exciting when on the way in to the village we were assailed by a strange man covered in red feathers: fortunately, Bamba spotted him just in time and promptly locked all the doors!
Our journeys to the more remote parts of southern Gambia never went smoothly. Amongst our problems were a puncture, distributor trouble and the taxi getting completely stuck in sand, but it is a miracle to drive on these roads at all and we were most grateful for the driver's efforts.
With only three more days left in the Tropics, Tuesday was our last day of collecting as we had much cleaning and packing to do. On Wednesday it came as no surprise to get a special visit from the hotel manager, who had had bitter complaints from the maid about the state of our bathroom. After a severe grilling from the top man, he took a smiling plumber into our bathroom.
Our coach came on time to take us to the airport and the fiasco of our return began. The organisation at Yundum is somewhat lacking and our luggage was whisked away by a hyperactive little man to the wrong check-in point. With fifteen minutes to take off, I spotted the mistake, our bags were on the plane to Gatwick! Both planes were subsequently delayed as the staff frantically rectified the fault. At least our bags made it back … so all is well that ends well!
This article by Craig and Carl Ruscoe was first published in our magazine Pallidula in October 2000.
We would like to thank Gonçalo Rosa of Atoll Specimen Shells for the use of his copyright photographs.