Collecting Marginellidae on the Cape Peninsula 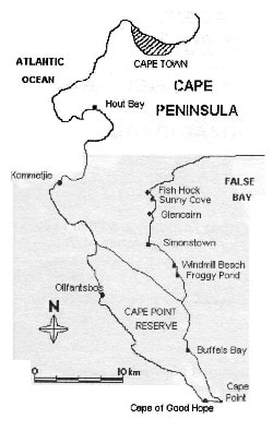 The Cape Peninsula is a narrow strip of land that runs from Cape Town in the north to Cape Point, 77km to the South. In most places, the peninsula is less than 10km wide, bordered by the Atlantic Ocean on the west, and False Bay on the east. Despite the small geographical distances, the molluscan fauna of the Atlantic and False Bay coastlines differ markedly. The Marginellidae are a good example of this, with many more species occurring in the warmer water of False Bay.