A brief history, the uses and production of shell buttons

by John Llewellyn-Jones
Photographs courtesy of John Llewellyn-Jones and the Pearly Society
A button is usually a disc-like piece of solid material having holes or a shank through which it is sewed to one side of an article of clothing, and used to fasten or close the garment by passing it through a loop or hole in the other side. The word button comes from an old French word, boton, which meant "bud" as well as button. Boton probably came from an older word, bouter, meaning to "push out".
Buttons made of carved stone were being used by the Persians in 3000 BC, not as a fastener but as a way of distinguishing one person's property from another's. But they had a chequered history until the end of the 12th century when they started to be used for fastening shoes, tunics, surcoats and hoods and were made of bone, metal or wood. It wasn't until the 13th century, when the button hole was invented, that buttons become so prominent that in some places laws were passed putting limits on their use.
It was only when mechanisation took place that mollusc shells, in particular pearl shells, were used in any quantity for button making. The button industry reached its peak in the late 19th century producing billions of pearl buttons which were used for buttoning up bodices, waistcoats, long gloves, boots, in fact too many uses to name here. 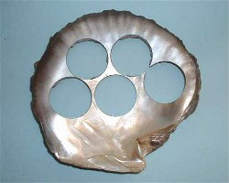 Buttons are made from shells by first cutting out "blanks" using a tubular saw. These blanks are then split to the required thickness. Two, three or four holes are drilled in the blanks for sewing. Any other decoration or shaping is then carried out as they are then dropped into dilute acid to clean them, increase their lustre and smooth off any unfinished edges. They are then sewn on to cards for export.
Four main species of pearl-lined shells were and are still used today for making buttons:
The pearl oyster, which has two valves which are thick, wide and shallow making them easy to work. There are two species, the black-lipped pearl oyster Pinctada margaritifera L., 1758 and the larger gold-lipped pearl oyster Pinctada maximus Jameson, 1901.
The button or commercial top shell Trochus niloticus L., 1767, a tall top-shaped univalve with red blotches and stripes on the exterior and an internal lining of a thick, rich creamy nacre.
The green turban Turbo marmoratus L., 1758, which has a thick rugged heavy shell with a typical green exterior and an iridescent greeny-pink pearly nacreous interior.
By the mid-Victorian era the pearl shell trade had reached its height in England with some 2,000 tons of shells being imported in 1859 from the East (Ministry of Trade figures). By the 1890s there were over 200 factories in London and 4,000–5,000 people employed in making buttons in Birmingham. At this time the American manufacturer John F. Boepple began to use the less iridescent but abundant freshwater mussel shells found along the Mississippi River and its tributaries to make his buttons.
But the industry declined almost to extinction in the 20th century with the impact of the over-fishing of the pearl shell itself, with the cessation of imports of pearl shells during the two world wars and the years following them and the advent of cheap, mass-produced plastic substitutes.
Today at the beginning of the new millennium the industry has recovered, with pearl buttons coming out of America, China, India, Japan and the Philippines. Pearl buttons in all sorts of shapes, sizes, qualities, types and styles are being used on almost any type of garment as was happening in the mid-Victorian period. And with people wanting to be different, other types of shells are now becoming fashionable and are being used for making them. The main species are:
1. Abalone shell
2. Cowry shell
3. Fan shell
4. Helmet shell
5. Mussel shell
6. Nautilus shell 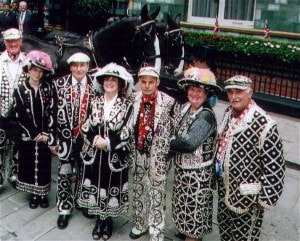 Lastly, you might have seen at a local fair, at a charity function or in a seaside theatre a "Pearly". This is a lady, gentleman or child dressed up in a suit covered in designs made out of pearl buttons. It was in the mid-1800s that a road-sweeper by the name of Henry Croft became the first person to wear a pearly outfit outside in the East End of London. He was followed by Albert Chevalier, a famous Cockney music hall star who appeared in one of his turns as a coster, short for costermonger. He covered his outfit with rows of pearl buttons and his turn "brought the house down". The fashion started in a big way when a Japanese cargo ship laden with pearl buttons foundered in the Thames during a fog in the 1880s and its pearly cargo was washed ashore.
After this it didn't take long for the costers to dress up as "pearlies". The heads of the families both male and female becoming the "Pearly King" or "Queen". The patterns or designs became fanciful, luck-orientated and often deeply pagan. For example, borders became close set as protection against evil while bells scared off demons and a donkey-cart wheel or sun meant good fortune, luck and money.
This article by John Llewellyn-Jones was first published in our magazine Pallidula in October 2002.
We would like to thank the Pearly Society for the use of their picture of pearly kings and queens.