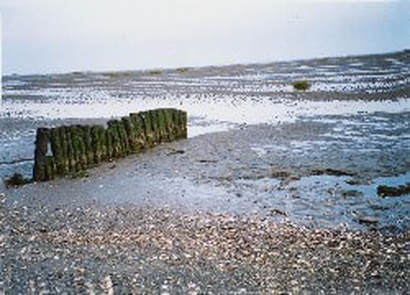 I was sent on business to Barrow-in-Furness, and was delighted to find it marked on the map with golden sands. I booked into a delightful small hotel that is also a pub, with excellent breakfast and evening meals called Clarke's Hotel, at Rampside. Although on arrival it was raining, I put on my raincoat and ambled down to the beach – it might never have stopped raining. On first perusal I discovered hoards of cockles, Cerastoderma edule, and beautiful Macoma balthica. The Macoma balthica were pink, dark pink, pale pink, yellow, cream, white, peach and all with both valves preserved and intact. They were mostly juveniles, but to have them intact, with such colour variation – I was very happy. I was also pleased to find a few Turritella communis, as the beaches I go to rarely have them, and I also found one specimen of a little as yet unidentified gastropod
At Whaley Island I found nothing at the beach, but it was raining, and I didn't have a pair of wellies to investigate slippery stones and seaweed. So I chose on my remaining days to concentrate on Foulney Island and Rampside Beach.
For the next three days after work I explored the area. Rampside Beach was very good for beached specimens of bivalves and gastropods, especially the Macoma balthica and Littorina genera. To the far right of the beach there was an area of rocks with more gastropods and the Mytilus edulis and the oysters.

Foulney Island was a lovely walk out along a causeway. This is where the beached gastropods and Mytilus edulis mainly came from. Beyond the cement block on the right-hand side (as recommended for baiters) there were stones strewn with seaweed. Littorina obtusata could be found moving amongst the seaweed, and the Mytilus edulis were between the rocks and stones. The Nucella lapillus preferred the exposed rocks and stones, and Littorina littorea and L. saxitilis could be found wherever there was moisture, but also in the seaweed.
It was a very picturesque place and those of you into bird watching as well would have appreciated the oystercatchers, redshank, sanderlings, dunlins, curlews and whimbrels, and various gull species. In the summer there are nesting eiders, sandwich and little terns as well as common terns. It might not seem a shelling Mecca to some of you, but I found the place delightful, relaxing and the food at Clarke's hotel was wonderful (the moules meunière come all the way from Chile!)
This article by Selina Wilkins was first published in our magazine Pallidula in April 2004.