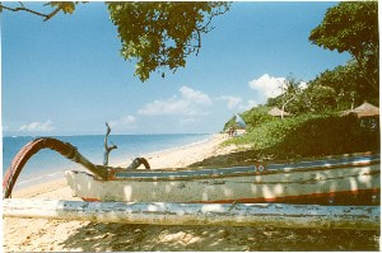 In the summer of 2002 we spent our holidays in Bali indulging our usual interests in scuba diving, shell collecting, exploring the countryside and trying the local culinary delights. We were at the extreme east of the island, four hours by road from the fleshpots of Kuta and Sanur. The area is very underdeveloped, just a few small family run "hotels" made up of little self-contained cottages. Not self-catering, for food in the little local restaurants was excellent and dinner for four cost less than $20. Wonderful countryside and beaches. The skyline dominated by Gunung Agung, a 9,000ft volcano. Major eruptions in 1962, '64 and '74. The 1964 one covered the area in lava flows down to the sea, killing 3,000 and making 100,000 homeless. The other big volcano has a magnificent caldera filled with a crescent-shaped lake about 20km across with an active central cone.
The diving and snorkelling were very good on pristine reefs and lots of shells and a very fine wreck from WW2. Most of our shell collecting was done wading or snorkelling on the reefs within a couple of miles of our hotel. 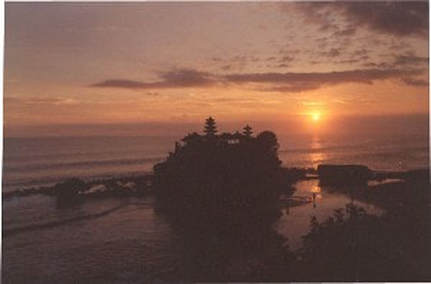 We did not collect a large number of shells though we got a good selection. Notices on the beach asked us to preserve the reef, so in deference to that we were sensitive about collecting live shells. There was no ban on collecting, either from the sea or the beach, but we tried to be eco-friendly and collect only one or two of each species. The major problem, as always, is cleaning and the ants really couldn't be relied upon to always complete the job! One day snorkelling just opposite our beach we found a flat area of rocky bottom between patch reefs covered with about 20 very large Lambis chiragra Linné, 1758; we collected a couple thinking that we could get more at the end of the trip but never saw them again. Another day the same rocky patch was covered with Conus distans Hwass, 1792 and Conus marmoreus Linné, 1758; never saw them again either. Where were they hiding? We found several fine large Vasum ceramicum Linné, 1758 in about one metre of water just opposite our hotel. 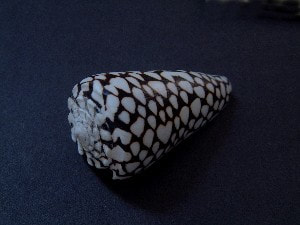