Cone shells from a Scottish loch

Mike Filmer, an authority on cones, recently received an enquiry about some unusual shells found on a beach in Scotland. Five shells, all dead, were found on the shore of Loch Nan Ceall, near Arisaig. Two of these shells are shown in the photograph below. One is a cone, possibly Conus ventricosus. The lower part of the aperture of the other resembles a Strombus, possibly S. luhuanus or S. decorus. This is very puzzling, as these species are absent from UK waters. 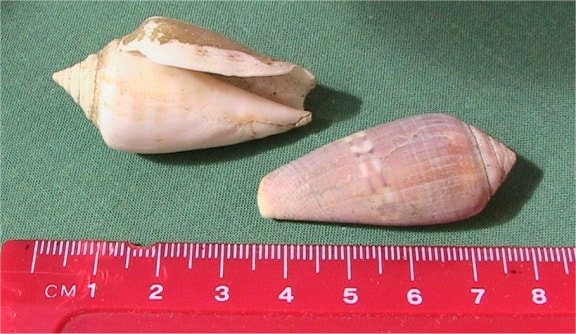 There are shellfish farms in this loch, and it may be that these shells could have been brought in with imported shellfish, either as larvae or juveniles.
It is also possible that these specimens were deliberately placed on the shores of the loch or were carried there from the Mediterranean on the bottom of a boat (not impossible since a specimen of C. ventricosus turned up about one hundred and thirty years ago in New Zealand, where it was described and named C. zealandicus by Hutton in 1873.
If anyone has any ideas as to what these shells are, and how they may have come to be on the shore of a Scottish loch, please contact Daniel Gordon at Tyne and Wear Museums.
This item was first posted in 2008.