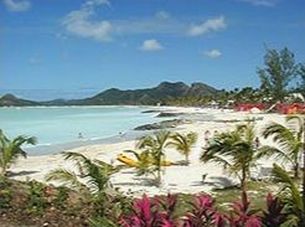 At Easter the Whicher family visited the small Caribbean island of Anguilla for diving, shell collecting and sunshine – in all of these we were highly successful.

To reach Anguilla we flew to Antigua and stayed at Lashings Beach Restaurant, a favourite haunt, for a couple of days. A particular project was to see if we could find any specimens of Vasum globulus Lamarck, 1816. This small, almost spherical vase is endemic to the Antigua–Barbuda bank and was first described by Lamarck from "West Africa", but it has not been seen from Africa despite the intensive commercial collecting of the last 50 years. The first documented Caribbean specimens were collected in 1918 on Antigua and were thought to represent a new species, named by Henderson (1919) Turbinella nuttingi. More recently it has been described only from Antigua and Barbuda, in particular from the entrance to Falmouth Harbour. So having hired a car we made for a dirt road along the promontory overlooking the harbour entrance. This led us to a small beach where, after only a few minutes, we found some worn specimens of our quarry. Further searching along both sides of the harbour entrance netted us a good catch of beach specimens and one live. Snorkelling would have been worthwhile but it was very rough on the day.
In the harbour itself sand had been dredged and dumped to make a car park. It was solid shells, mainly Bulla striata Bruguiere, 1792; Cerithium atratum (Born, 1778); Cerithium litteratum (Born, 1778); Cymatium nicobaricum (Roding, 1798); Cymatium muricinum (Roding, 1798); Modulus modulus (Linné, 1758); Murex brevifrons Lamarck, 1822; Oliva reticularis Lamarck, 1810; Strombus pugilis Linné, 1758 and Anodontia alba Link, 1807 of which we collected many specimens.
A half-hour flight from Antigua brought us to Anguilla (the name means "eel" and the island is very long and thin like an eel). The island is the most northerly of the Leeward islands and unlike its volcanic neighbours is low-lying and made of coral. It lies with the Altantic Ocean on its north-eastern side and the Caribbean on the south-west.
We found that our apartment, which was a couple of miles east of the main town called "the Valley", was five minutes' walk from a deserted, reef-protected, rocky and sandy beach which was covered in fine specimens of Astraea tuber (Linné, 1767); Conus jaspideus Gmelin, 1791; Echininus nodulosus Pfeiffer, 1839; Leucozonia ocellata Gmelin, 1791; Nerita peloronta Linné, 1758; Nerita versicolor Gmelin, 1791; Nerita tessellata Gmelin, 1791; Nodilittorina tuberculata Menke, 1828; Pisania tincta (Conrad, 1846); Pisania auritulus (Link 1807); Purpura patula (Linné, 1758); Fissurella nodosa (Born, 1778) and Fissurella barbadensis (Gmelin, 1791). A torchlight walk along the beach at night revealed several fine Tonna maculosa (Dillwyn, 1817) cruising over the coral bottom. One morning we found four specimens of Cypraecassis testiculus (Linné, 1758) all together on the beach freshly dead – had they all crawled up together? And why?

Shoal Bay East contains many patch reefs stretching out for half a mile to the main barrier reef which surrounded this part of the island. This provides calm waters of very varying depth for snorkelling and scuba diving. As often seems to be the case the shells frequent quite localised areas. Thus one area of sand and coral in about 2m of water was commonly inhabited by large Vasum muricatum (Born, 1778). On some days 20 specimens could be counted but on others very few. As always we limited ourselves to a small number of live-caught specimens. We scuba-dived in this part of the island on several occasions and found: Astraea caelata (Gmelin, 1791); Astraea tecta (Lightfoot, 1786); Astraea phoebia Roding, 1798; Cassis flammea (Linne, 1758); Cassis tuberosa (Linne, 1758); Lecozonia nassa (Gmelin, 1791); Strombus gallus Linne, 1758; Thais deltoidea (Lamarck, 1822); Turbo castanea Gmelin, 1791 and Xenophora concyliophora (Born, 1780).
Of great interest to us was the report by Ed Petuch in 1998 (Watters et al, 1999) of an undescribed endemic species of vase related to Vasum capitellum (Linné, 1758). Our first find of the "species" was in a glass jar of shells on sale in a roadside stall. However we were very fortunate to come upon a large colony of this shell at a depth of about 15m on Scrub Island just off the eastern tip of Anguilla. We collected a representative sample which is now with Dr Ed Petuch of Florida Atlantic University for description. This was certainly a morphologically distinct form somewhere between V. capitellus and V. globulus but whether it is a separate species is probably a matter of speculation. 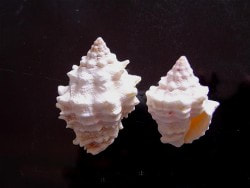 Vasum capitellum (Linné, 1758)
It is always worth visiting the fishermen and we visited Sandy Ground, the main fishing "port" of the island. Here we found the usual huge mounds of Strombus gigas (Linné, 1758) that one encounters throughout the Caribbean. There must have been several hundred thousand specimens discarded after removal of the animal for food. Always with the characteristic slit cut in the spire to release the animal. Despite this there were many fresh and finely coloured specimens to collect – but sadly they are big and heavy. We were particularly excited to find a heap of Cassis madagascarensis Lamarck, 1822, Cassis tuberosa (Linné, 1758) and Charonia variegata (Lamarck, 1758) by a fisherman's hut. After sunning ourselves on the beach waiting for his return from fishing we were able to negotiate for some fine specimens. He would accept no money but was an ardent collector of telephone cards. We thus departed with two fine Cassis madagascarensis and a Charonia variegata for only the promise that we would send him some English telephone cards (which we have done – then to receive an email from him asking if we would like him to start collecting shells for our next visit! Such a pleasant surprise as he and a family of four lived in a small hut on the beach about the size of a single garage, but there is an internet café on the beach next door!!). 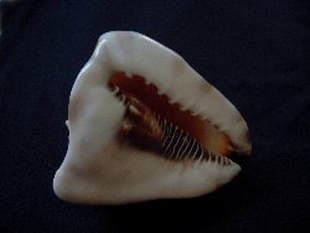 Cassis tuberosa (Linné, 1758)
We were able to negotiate with another fisherman to buy for a few dollars a splendid Cassis tuberosa that had just been caught. He was, we discovered, the "shell man" of the beach, to whom all the fishermen took the shells they caught for cleaning and selling on to dealers. We were fascinated to watch as he extracted the live animal by banging the shell on the sand with all his strength until the animal flowed out as a sludge, the shell being easily washed clean. Useful, as Cassis are extremely difficult to clean. Also discarded in and among the lobster pots were specimens of Fasciolaria tulipa (Linné, 1758), Strombus costatus Gmelin, 1791 and Strombus gigas (Linné, 1758) occupied by large (dead) hermit crabs which had crept into the lobster pots.
Behind the sand bar on which the village is situated there is a fetid lagoon, possibly once a mangrove swamp, where dredging had left piles of mud full of large semi-fossilised Arca zebra (Swainson, 1833) and Murex brevifrons Lamarck, 1822. The cliffs above are of Miocene age and contain fossil echinoids.
Overall a good selection of Caribbean shells and good diving – an island well worth visiting. If you would like any further information don't hesitate to contact us.
References
Henderson, J.B. (1919), "Mollusca" in C.C. Nutting, Barbados and Antigua Expedition, University of Iowa Studies in Natural History, 8/3: 199–203

This article by John, Jenny, Alex and Charlotte Whicher was first published in our magazine Pallidula in October 2002.