An insight into collecting sinistral shells

by Carl Ruscoe
Photographs courtesy of Harry Lee
A sinistral shell is a shell of a gastropod which is "left-handed". The shell is coiled in an anti-clockwise direction, so that when viewed from the front (ventral view) with the spire uppermost, the opening or "aperture" appears on the left. The concept of sinistral shells has fascinated countless shell collectors over the years. Just as the majority of humans are right-handed, gastropod molluscs follow a similar trend and a left-handed shell is something of an oddity. Although there are many species which produce left-handed shells, particularly amongst land snails, they can still look rather strange to the conchologist. 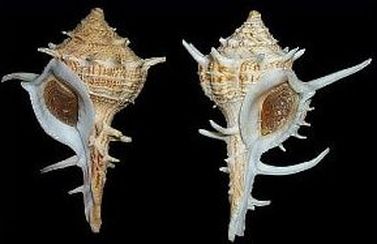 Tudivasum armigerum (A. Adams, 1855)
To myself, a sinistral shell somehow looks as if it is "incomplete". Sinistral shells strike all collectors differently, but nevertheless most experienced collectors will say that they seem anything but normal.
My brother Craig and I have been collecting shells for about 20 years, but it took 10 years of collecting before we saw our first sinistral specimen! Very few "run-of-the-mill" shell shops at seaside resorts offer any sinistral shells for sale, and in most cases this is where a young collector first becomes attracted to seashells as a hobby. Until we were about 14 years old it did not occur to us that all our gastropod shells coiled in a clockwise direction, and we did not even imagine that a shell could coil the other way so as to be "left-handed". When we realised this we became eager to obtain our first "lefty" …
From the Macdonald Encyclopaedia of Shells (1982) we picked out the common European tadpole snail, Physa fontinalis, and we set out to find it. We waded through the local brook until we found a similar species: Physa acuta. The first specimen I found crumbled in my hand and I was devastated; but I knew I could find another, and sure enough we found several. This was the start of my fascination with sinistral shells.
Most beginners in shell collecting, who tend to be children, cannot afford to pay a fortune for shells that are abnormally sinistral ("sinistral freaks"). There are, however, several families of molluscs which normally produce left-handed shells. In this article I have described such families for the benefit of beginners and low-budget collectors who are looking to add a few of these left-handed oddities to their collection. 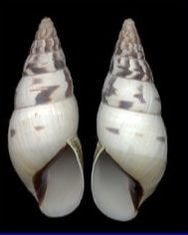 Corona regalis (Hupé, 1857)
Freshwater snails  Most freshwater shells tend to be colourless and unattractive. However, the most easily obtained sinistral shells in the UK are found in freshwater. These snails belong to the genus Physa (family Physidae) and are commonly known as "tadpole snails". Most species grow to no more than 15 mm in length and are thin fragile shells; they are drab olive-to-brown in colour, sometimes with a whitish columella. They prefer to live in muddy, slow-flowing lowland streams.
There are several other families of freshwater snails which can produce sinistral shells, including Planorbidae, Ampullariidae, Thiaridae and Lymnaeidae. However, these are not as readily obtainable to the novice collector, and in fact some of these snails live in dangerous parts of the world where the water is badly polluted and can contain deadly parasites.
Terrestrial snails  As a rule, terrestrial snails (land snails) can produce a much greater range of colours in their shells than freshwater or brackish snails. This, along with many other features, makes the land snails more appealing to most collectors. There is also a wider variety of left-handed species in the land snail category. In the UK the most easily obtained sinistral land snails belong to the family Clausiliidae (the "door snails"). These are small turret-like snails which can be found at the base of trees in damp deciduous woodland. The British species tend to be brownish in colour and rarely grow to more than
20 mm in length. Other sinistral snails to be found in Europe come from families such as Chondrinidae, Buliminidae and Vertiginidae.
The most familiar sinistral snails from tropical regions are the Amphidromus snails of the family Camaenidae. These snails produce a wonderful range of colours and patterns and are reasonably cheap. Most of the more common species can be purchased from dealers for a very few pounds, and there is probably no better way to start a land snail collection. Many other families of land snails from tropical regions have some left-handed species, including Achatinellidae, Partulidae, Orthalicidae, Achatinidae, Helixarionidae, Helicidae and Bradybaenidae.
Marine gastropods  In seashells left-handedness is a far rarer occurrence; there are only a few families which normally produce sinistral shells.
The largest sinistral species of gastropod is the lightning whelk, Busycon contrarium. This species can grow to nearly 400 mm in length and is common off the southeastern coasts of the USA. There are a few similar species in the genus Busycon which secrete a sinistral shell, but also several dextral (right-handed) species in this same genus. Another easily obtainable family of sinistral shells are the Triphoridae. These are small turret-like shells which are mostly less than 20 mm in length. They can be found in most warm and tropical seas and are often seen on dealers' lists costing £1–4. One species, Triphora perversa, is actually quite common in shell grit on some Mediterranean shores.

Busycon carica (Gmelin, 1791)
The family Buccinidae (cold-water whelks) contains several species whose shells are sinistral; however, most of these are rather rare and expensive. There is only one sinistral species which is reasonably common: Neptunea contraria, a native of the Mediterranean which can sometimes be purchased for less than £10.
Sinistralia is a genus of the family Fasciolariidae (the spindle whelks). As the name suggests, their shells are sinistral. They are interesting little shells, usually about 20 mm in length, and most of them can be obtained fairly cheaply. Among the largest molluscan family, the Turridae, one genus is associated with sinistral shells: Antiplanes. The cold water species Antiplanes major and A. contraria are probably the best known, and while neither is expensive to buy they may be difficult to find on dealers' lists. Interestingly, some members of the genus Antiplanes, such as A. sanctioannis, are actually dextral!
Sinistral freaks  So far, I have discussed species of shell which are normally sinistral. However, "sinistral freaks" can occur from an array of gastropod species (land and marine) which are normally dextral. No one knows exactly what causes a gastropod to secrete a sinistral shell, but it must be understood that in the majority of cases the whole animal is sinistral. From a very early age in a gastropod's lifecycle, its body undergoes "torsion". This is the process of the animal twisting so that it continues to grow in a coiling fashion, around a central axis called the columella. In the case of a sinistral individual, the body has twisted "the wrong way" – anti-clockwise as opposed to clockwise – and the shell is then secreted to house this left-handed snail, also coiling in an anti-clockwise direction.
Freak sinistral examples of normally dextral species are highly prized by collectors. The most famous of such freaks is the sinistral chank shell of the species Turbinella pyrum. The normal right-handed form of this species is extremely common in India and Sri Lanka, but sinistral specimens are extremely rare and are revered by Hindus. A specimen could cost well over £1000. Even rarer in the family Vasidae would be a sinistral specimen of Tudivasum armigera. 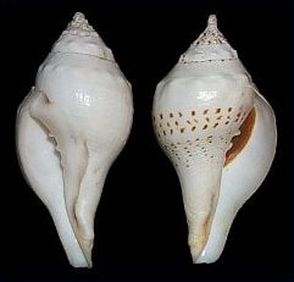 Turbinella pyrum L., 1767
Jeffreys Bay in South Africa is a well known site for sinistral freaks, for some reason. Occasionally a sinistral cowrie gets washed ashore and even in poor beached condition it will fetch well over £1000. Also, species of the families Marginellidae and Olividae produce sinistral freaks on this beach. 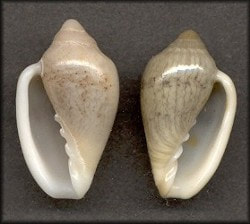 Marginella lineolata G.B. Sowerby III, 1886
Freak left-handed Conus are exceedingly rare, and yet the fossil record shows us that left-handedness was at one time "the norm" for many species in the family Conidae. Indeed, the collector wishing to purchase some inexpensive sinistral shells can quite easily obtain fossil species from Florida such as Conus adversarius, C. osceolai and C. lindajoyceae.
Left-handed freaks available to the low-budget collector include the volute Cymbiola vespertilio and the marginella Volvarina philippinarum. These sinistral forms are found in the Philippines and are not too expensive to buy; V. philippinarum is the most common sinistral freak by far, and sells for less than £10.
Interestingly, just as there are sinistral freaks, dextral freaks can occur of species which are normally sinistral. Such freaks are of special interest to the collector. An example is the normally sinistral Busycon sinistrum, which occasionally occurs dextrally coiled.
The vast majority of sinistral freaks command high prices and many are known by just one or two specimens. With the help of fellow conchologist Simon Aiken I have made a list of some of the better known examples of sinistral freaks. This list is far from complete, but it is intended to give an idea of the diversity of normally right-handed species which have occasionally defied the rules of nature and produced a left-handed shell. The majority of sinistral freaks belong to the order Neogastropoda (the "new gastropods"). In particular, the families Olividae, Marginellidae and Volutidae produce the most sinistral freaks.
I wish to thank the following for their help with this article: UK shell dealer Simon Aiken for his input and advice; Harry Lee of the Jacksonville Shell Club, Florida, for permission to reproduce pictures of sinistral freaks from his amazing collection; and the Jacksonville club's webmaster Bill Frank for supplying the images.
This article by Carl Ruscoe was first published in our magazine Pallidula in April 2001.
The magnificent Harry Lee collection of sinistral shells can be seen on the Jacksonville club website.
The better known marine sinistral freaks